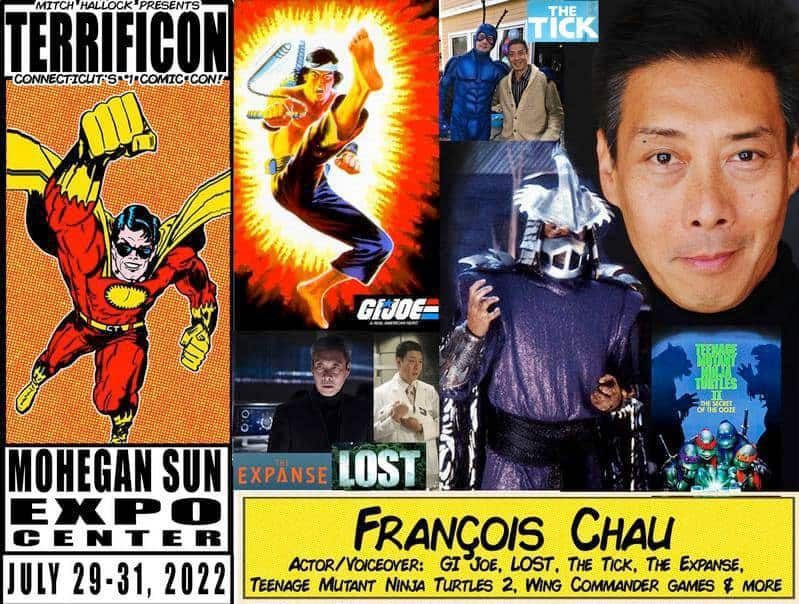 Mr. Chau is best known for his roles on Lost, The Tick, TMNT, The Expanse and the voice of Quick Kick on GI Joe. He joins our ever growing guest list of actors and comic book creators for three days of conic con fun at Mohegan Sun.

Tickets and dealer tables are on sale now. Visit our website for more information www.TERRIFICON.com

Chau has had a number of diverse roles, playing Chinese, Japanese and even Hmong characters, most notably as Dr. Martin Ng in the American sci-fi series Gemini Division, and as Dr. Pierre Chang in 17 episodes of ABC’s Lost.

Chau has also taken on a number of smaller TV roles. He has appeared as Koo Yin, a Chinese consul in the drama 24 and a Chinese diplomat in Stargate SG-1. He was the voice of Quick Kick on G.I. Joe: A Real American Hero and Dr. Shen in XCOM: Enemy Unknown, and he portrayed Lieutenant Winston ‘Vagabond’ Chang in the Wing Commander III and Wing Commander IV video games. He was the voice of Sensei Ishikawa in the Ghost of Tsushima video game.

He was also featured in Chris Brown’s music video Fine China, the 2013 film 21 & Over, the television film 9/11: The Twin Towers, and Teenage Mutant Ninja Turtles II: The Secret of the Ooze, where he physically played The Shredder.

His latest projects have included a Syfy production, The Expanse, starring as recurring character Jules-Pierre Mao, father of main character Julie Mao, and a recurring role as Arthur’s step-father Walter on The Tick. He has also appeared in the Disney Channel spy-action comedy, K.C. Undercover, where he plays Zane, an evil villain who kidnaps K.C. and threatens to kill her family, due to a checkered history with them.

Chau appeared on The George Lucas Talk Show during a fundraiser where various guests appeared for a marathon of the entirety of the seventh season of the HBO series Arli$$. In 2019 he starred in the science fiction horror film The Honeymoon Phase.