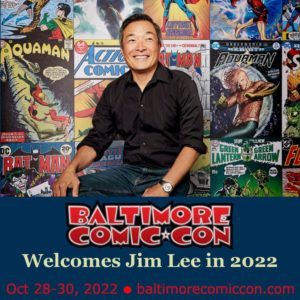 The Baltimore Comic-Con is thrilled to welcome superstar creator Jim Lee to our 2022 event on Friday, October 28th. Get your tickets online now while you can!
Jim Lee, a world-renowned comic book artist, writer, editor, and publisher, is currently Chief Creative Officer of DC and Publisher for the company.
Known for his incredibly detailed and dynamic artistic style, Lee is one of the most revered and respected artists in American comics. A veritable legend in the industry, he has received numerous accolades and recognition for his work, including a Harvey Award, an Inkpot Award, Diamond Gemstone Awards, and Wizard Fan Awards.
Since becoming Publisher in 2010, Lee has overseen many of the company’s highly successful publishing programs, including the recent record-breaking Rebirth line of comics, as well as The New 52 initiative that relaunched the entire line of monthly superhero comic books. As part of the revamp, Lee designed and reimagined the new, more contemporary costumes for some of the DC Universe’s most iconic characters, including Batman, Superman, and Wonder Woman. Under Lee’s leadership, DC also successfully launched same-day digital across the entire line of comic books.
As Chief Creative Officer, Lee is charged with leading all creative efforts to fully integrate DC’s rich portfolio of characters and stories from iconic brands such as DC (Batman, Superman, Wonder Woman, Justice League), DC Vertigo (Sandman), and MAD across all media. As part of these efforts, Lee works closely with DC’s Franchise Management team and fellow Warner Bros. colleagues to develop cross-promotional support for DC properties.
In addition, Lee also serves as the Executive Creative Director for DC Universe Online (DCUO), the only massively multiplayer online (MMO) game set in the DC Super Hero universe. Created by Sony Online Entertainment (SOE), this story-driven action adventure game is currently operated by Daybreak Games. Prior to his current post at DC, Lee served as Editorial Director at DC where he oversaw WildStorm Studios and was also the artist for many of DC’s bestselling comic books and graphic novels, including All Star Batman and Robin, The Boy Wonder, Batman: Hush, and Superman: For Tomorrow.
Jim Lee was born in Seoul, South Korea but moved with his family to St. Louis, Missouri when he was young. After graduating cum laude with a BA in Psychology from Princeton University in 1986, he started his professional career at Marvel Comics where his work on the X-Men continues to hold the all-time sales record for single-issue sales at an incredible 8 million copies sold in one month. In 1992, he started his own production company, WildStorm Productions, and co-founded Image Comics, an independent comics company that quickly grew to become the third largest North American publisher. Two of his creations, WildC.A.T.s, and Gen13, saw life beyond comics as a CBS Saturday morning cartoon and as a DTV animated movie distributed by Disney, respectively. In 1998, DC purchased WildStorm Productions and Lee left Image Comics to join the DC Entertainment creative team.
Lee resides in Los Angeles, CA with his wife, 9 kids, 5 dogs, and a cat.

“Jim Lee is coming back to Baltimore!” said Marc Nathan, show promoter for the Baltimore Comic-Con. “We are so excited to host Jim’s return to the show. He is in great demand, his body of work is vast, and he continues to be one of the most influential working artists in the comics industry today. I am sure a lot of fans will be coming to the Baltimore Comic-Con on Friday this year to meet Jim!”

Jim Lee Autographs entitle the holder to one signature on your own item on Friday only (CGC submission fees not included, CGC authentication optional at his table for an additional charge).