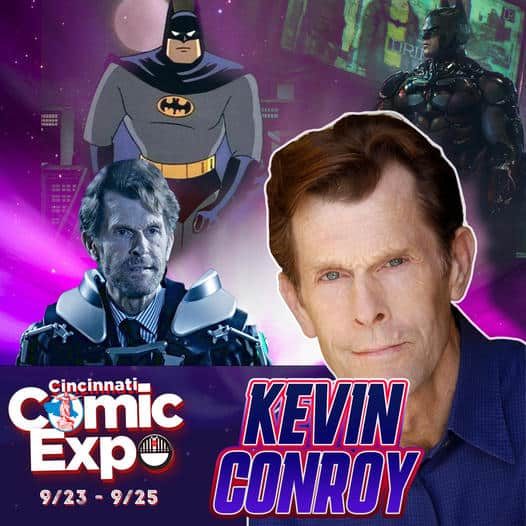 Kevin Conroy leads up the guests from the various DC animated franchises that will be attending the 2022 Cincinnati Comic Expo!

More than half of the projects in his career have been as the voice of Batman/Bruce Wayne in dozens of animated series, films, video games, and more. On camera he has portrayed Bruce Wayne on the CW’s multi show crossover arc, Crisis on Infinite Earths. His career extends further to include roles on Another World, Search for Tomorrow, Dynasty, Matlock, Ohara, Tour of Duty, Cheers, Murphy Brown, and others. His voicework can also be heard in The Venture Bros, Crusaders of Might and Magic, Jak and Dexter, Max Payne 2, Ben 10, Green Arrow, Turbo FAST, and much more! Most recently, he has appeared in The Raven and Masters of the Universe: Revelation.

Get your admission tickets to the 2022 Cincinnati Comic Expo for an opportunity to get an autograph on Saturday and Sunday with Kevin Conroy: tinyurl.com/yck6ku8m