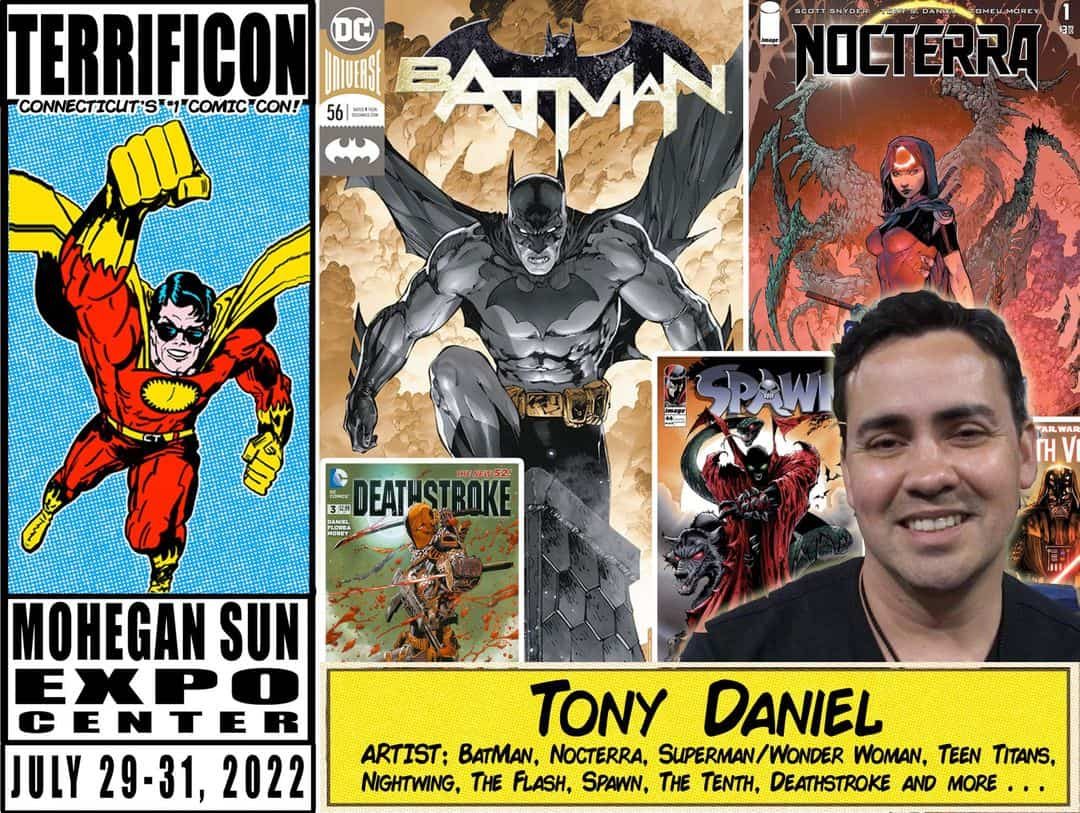 TERRIFICON continues to bring comic book fans their favorite creators to Connecticut, next up its artist/writer TONY DANIEL!

Tony will be part of the largest guest list of comic book creators in all of New England at TERRIFICON at Mohegan Sun on July 29 – 31, 2022!

Daniel worked on various titles with Image Comics including his own creation, The Tenth. He also worked on titles for Marvel Comics . He gained status at DC Comics with his run on Teen Titans with writer Geoff Johns. He finished out the short lived Flash: The Fastest Man Alive series with Marc Guggenheim from issues #11-13, which ended with Bart Allen’s death.

From there, Daniel began his work for the main Batman title with writer Grant Morrison, beginning his run with issue #670. This issue began the Resurrection of Ra’s al Ghul crossover. He and Morrison collaborated on the “Batman R.I.P.” storyline during that time. After “R.I.P.”, Daniel wrote and illustrated Battle for the Cowl, the main mini-series dealing with the story’s aftermath.

In 2009, after Judd Winick and Mark Bagley’s four-issue run on Batman, Tony Daniel took over for a six-issue arc handling both writing and art duties. Daniel worked with Grant Morrison again on issue #701-702. He returned as writer and artist starting with issue #704 in November 2010 with his arc on Batman coming to an end at issue #712. Shortly after, Daniel was announced as the writer and artist of the relaunched Detective Comics, which was dubbed DC’s flagship series. In addition, he was announced as the writer of DC’s The Savage Hawkman series, which he would stay on until the eighth issue. Daniel stayed on Detective Comics until the twelfth issue, by which time he drew an annual for the series as well.

In July 2012, as part of the San Diego Comic-Con, Daniel was one of six artists who, along with DC co-publishers Jim Lee and Dan DiDio, participated in the production of “Heroic Proportions”, an episode of the Syfy reality television competition series Face Off, in which special effects were tasked to create a new superhero, with Daniel and the other DC artists on hand to help them develop their ideas. The winning entry’s character, Infernal Core by Anthony Kosar, was featured in Justice League Dark #16 (March 2013), which was published January 30, 2013. The episode premiered on January 22, 2013, as the second episode of the fourth season.

Daniel was announced as the artist for a two issue stint on the second volume of Justice League. He was subsequently announced as the primary artist accompanying Andy Diggle on Action Comics, following Grant Morrison’s departure. However, after Diggle left the title after only issue #19 (Diggle was co-writer for #20 and co-plot issue #21), Daniel took on the scripting and art duties for the two following issues completing the three-part story “Hybrid”, after which he too announced he would depart the series to work on a massive project for DC. This project was then announced in June 2013 to be Superman/Wonder Woman, with Daniel on as the artist. After working with Charles Soule on Superman/Wonder Woman, Daniel again returned to writing duties. Penciling and scripting the relaunch of the Deathstroke title, it sold out and headed off to a second printing.

See Tony this summer at TERRIFICON!