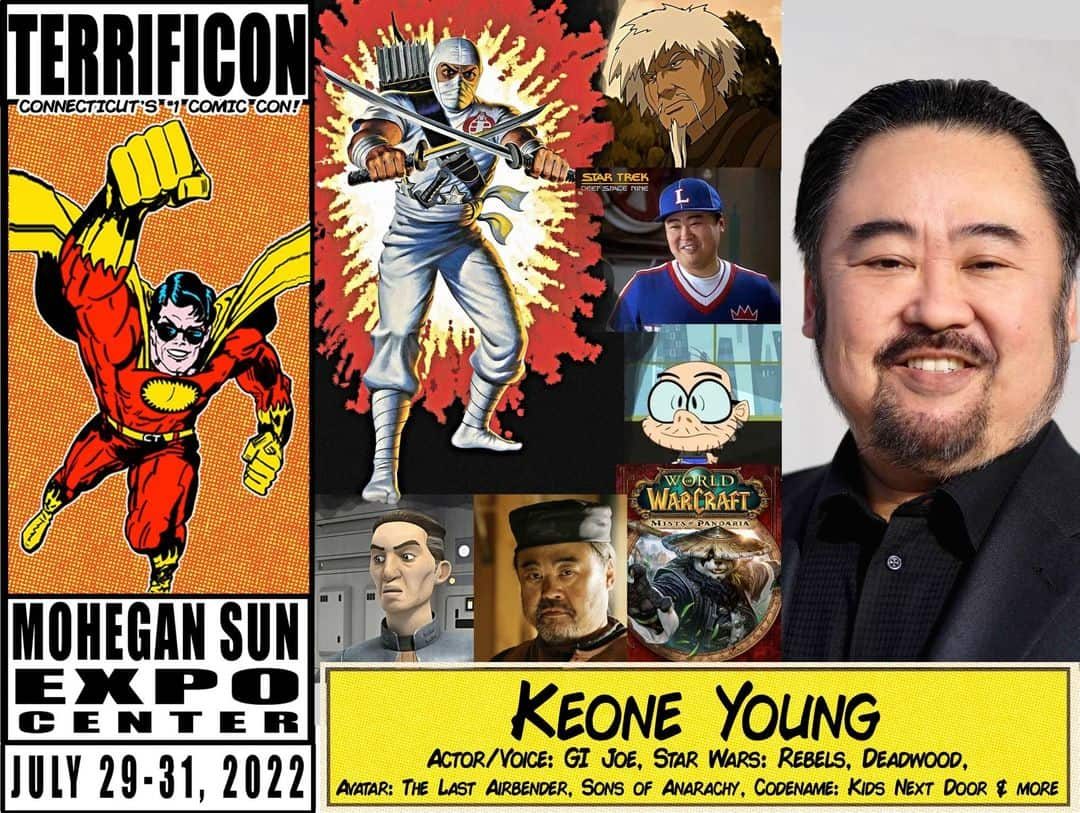 Fans know Mr. Young from his onscreen acting in Movies & TV shows such as Men In Black 3, Crank, Deadwood, Sons of Anarchy, Star Trek: Deep Space Nine and more. To animation fans he is the voice of Storm Shadow on G.I. Joe, and hundreds of other shows and even video games!

Meet Keone and your favorite actors and comic book creators only at TerrifiCon ™ – Connecticut’s Terrific Comic Con at Mohegan Sun this July 29 – 31! Tickets, hotel rooms, artist alley and dealer booths are on sale NOW! Don’t miss out! Visit www.terrificon.com for all the details!

Keone Young is legendary for many of his voice over credits which include Grandpa in American Dragon: Jake Long, Kaz in Hi Hi Puffy Ami & Yumi, Mr. Sanban in Codename: Kids Next Door, the Firebending master Jeong Jeong in the Asian-influenced Nickelodeon Avatar: The Last Airbender and Storm Shadow in the Sunbow G.I. Joe animated series, the Hard Master in G.I. Joe: Renegades, Mr. Wu on Nickelodeon’s show The Mighty B!, Babaram on Surf Ninjas, Marshall Kai Ti Chang in Indiana Jones and the Emperor’s Tomb, Silver Samurai in X-Men: The Official Game and Wolverine and the X-Men, Sensei in Young Justice, Chen Stormstout in the World of Warcraft: Mists of Pandaria expansion and Heroes of the Storm by Blizzard Entertainment, and Commander Sato in Star Wars Rebels. Recently, he appeared as Kojiro Sasaki in Record of Ragnarok, Tsunetomo Yamamoto in Godzilla: Singular Point, and will be appearing in the new Anime Star Wars Visions project playing the role of Kamahachi.

He has been prolific in his character work and has made numerous guest appearances on such varied television series as Head of the Class, Diff’rent Strokes, The Golden Girls, Murphy Brown, Mad About You, Family Matters, Futurama, The Simpsons, Alias, JAG, The Steve Harvey Show, Zeke and Luther, Shake It Up: Made In Japan and on the daytime soaps The Young and the Restless and Generations. He also portrayed the bodyguard of the Ancient One (Keye Luke) during the Asian Quarter storyline on General Hospital.
Young played Dr. Michael Kwan on the short-lived multi-ethnic medical drama Kay O’Brien, which aired in the fall of 1986 on CBS. Despite the fact that the network had high hopes for the series, just 9 of 13 episodes were aired. He was also a semi-regular on the HBO series Deadwood as Mr. Wu and played Henry Lin’s Uncle on the FX series Sons of Anarchy. He also played Mr. Wu, unrelated to the Deadwood character, in the movie Men in Black 3, played the role of Ellison Onizuka In the TV film Challenger, and HBO’s True Blood as Dr. Hido Takahashi, the man responsible for inventing the titular blood substitute.