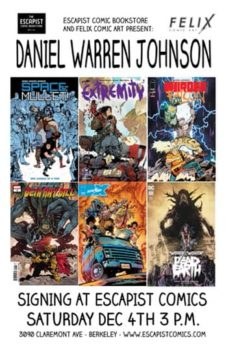 It is our first event in a long while and we are excited to have Daniel Warren Johnson as our guest on Saturday, December 4th at 3PM.

Daniel is a Chicago-based comic artist and illustrator. He first came to the public’s attention with his own web-based comic, SPACE-MULLET (since collected by Dark Horse Comics). This led to work with publishers including Marvel, DC, Image, and Dark Horse. His creator-owned title, EXTREMITY, was met with popular and critical acclaim, netting him an Eisner Award nomination for Best Limited Series. His follow-up is MURDER FALCON. His other credits include BETA RAY BILL and WONDER WOMAN DEAD EARTH.

Felix Comic Art is Daniel’s agent for his original artwork.

Please remember that we are still under a mask mandate in Berkeley and that we may have to limit the number of people in the store for everybody’s safety.