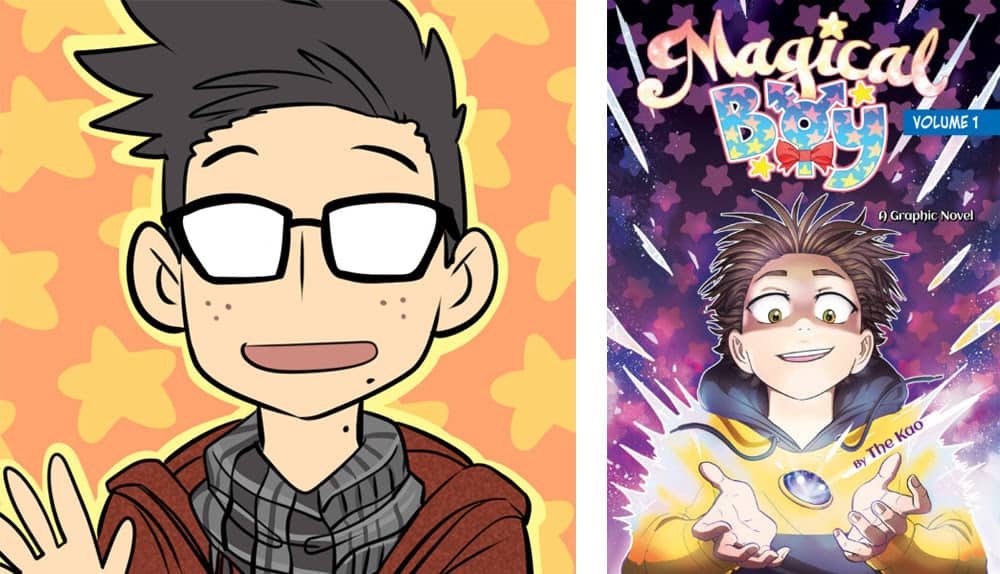 The Queer Comics Expo, presented in partnership with the nonprofits Cartoon Art Museum, and Prism Comics and Sponsored by Tapas Media, Evil Hat, and more, proudly announces the 2021 Special Guest and Keynote: The Kao, award-winning creator of the positive trans story “Magical Boy.” This year’s Queer Comics Expo takes place virtually on May 15-16, 2021 with The Kao’s Spotlight taking place on Saturday, May 15, 2021 at 11am Pacific. The Kao will be interviewed by TV writer Chloe Keenan, whose credits include the seminal series “Transparent” and the upcoming “Single Drunk Female.” More information about exhibitors, panels, the free community space and tickets for live programming available through cartoonart.org/qcexpo. Use promo code “CAMPRIDE” to save

In an interview with “Publishers Weekly,” Debra Dorfman, Scholastic VP and Publisher, Global Licensing, Media and Brands said of Magical Boy: “The character is so special, and the webcomic has a great positive message about acceptance, adventure, and being who you are. It’s the first licensed property for us with a transgender protagonist, and it felt very nostalgic in a way—it has the feel of Sailor Moon.”

The creator “The Kao” is Vincent Kao, an illustrator and comic artist known for his slice-of-life web series, Mondo Mango, and the Prism Award-winning webcomic, Magical Boy – both original series available at Tapas.

“I’m so excited to be participating in the Queer Comics Expo this year!” says creator The Kao. “It was such an honor to win the Prism Award for Magical Boy last year, and I can’t wait to share more about the journey in creating Magical Boy to hopefully inspire many others.”

Vincent graduated from Columbia College in Chicago with a Bachelor of Fine Arts in Illustration. He started his career through a series of comic strips surrounding his daily life and since then has freelanced, self-published, as well as collaborated in a few crowdfunded comic anthologies, all under “The Kao” name. To this day, he continues to work on his illustrations and comics in hopes to inspire and bring joy to everyone around him.  For more information, please visit The Kao.

The Kao’s award-winning story, Magical Boy, is a breathtakingly imaginative fantasy series starring Max—a high schooler chosen to become the next Magical Girl. There’s just one catch… he’s a trans boy! Although he was assigned female at birth, Max is your average trans man trying to get through high school as himself. But on top of classes, crushes, and coming out, Max’s life is turned upside down when his mom reveals an eons old family secret: he’s descended from a long line of Magical Girls tasked with defending humanity from a dark, ancient evil! With a sassy feline sidekick and loyal gang of friends by his side, can Max take on his destiny, save the world, and become the next Magical Boy? A hilarious and heartfelt riff on the magical girl genre made popular by teen manga series, Magical Boy is a one-of-a-kind fantasy series that comic readers of all ages will love. Magical Boy: Volume 1 is available from Scholastic on November 2, 2021 and is currently available for pre-order.