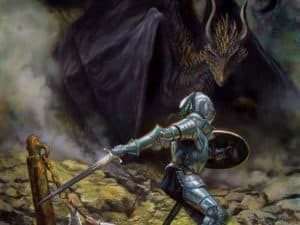 Norman Rockwell Museum (NRM) is pleased to announce a new summer exhibition, Enchanted: A History of Fantasy Illustration. This special exhibition includes more than 100 works of original art created by more than 50 artists whose work spans over five centuries and have never before been exhibited together.

Several years in the making NRM curator Jesse Kowalski, assembled an encompassing collection of work to present a serious examination of the history and influence of fantasy art. Enchanted: A History of Fantasy Illustration explores fantasy archetypes from Ancient Mesopotamia to today. The exhibition will outline eternal concepts within three sections; mythology, fairy tales, and the timeless narratives of good versus evil, heroes, and villains, told through paintings, etchings, drawings, and digital art created by imaginative artists from long ago to today. The ageless fascination with fantasy art in popular culture can be witnessed in blockbuster films such as The Lord of the Rings trilogy, television series like Game of Thrones, (and the books which preceded them), and in role-playing games such as Dungeons & Dragons and Magic: The Gathering. In an exhibition designed for all ages, numerous artworks from these fantastic worlds will be included, many on view to the public for the first time.

Mythology explores the worlds of dragons, mermaids, and satyrs, and stories of the huntress Diana, the warrior Mulan, and Perseus rescuing Andromeda with the head of Medusa. In Fairy Tales, the worlds of fire-breathing dragons, elves, fairies, and mermaids, and delight with images from Red Riding Hood, Rapunzel, and Alice in Wonderland. The Heroes and Villains section follows the exploits of Arthurian legends, Prince Valiant, Conan the Barbarian, and The Lord of the Rings; and haunting images of sorcerers and witches, and battles between angels and demons which depict the struggle between Good and Evil.

Artists showcased in the exhibition include:

Some of the artists mentioned above completed original work specifically for this exhibition. In addition, numerous pieces in the exhibit on loan from museums around the nation and private collections are rarely on view to the public–from engravings from the Middle Ages to the iconic paintings created for Dungeons & Dragons.

Fantasy presents an impossible reality—a universe where dragons breathe fire, angels and demons engage in combat, and magicians craft spells. As visionary author Arthur C. Clarke noted, “Science fiction is something that could happen… Fantasy is something that couldn’t happen.” Fictional and imaginative worlds of magic and adventure come to life through fantasy illustration. Myths, legends, fables, romance, and epic battles involving swords and sorcery occur in a world unfamiliar to us. Unlike science fiction, which is based on fact.

For thousands of years, mankind has depicted analogous fantastic themes in numerous cultures. Noted scholar of mythology Joseph Campbell claimed that mankind creates fantasy to help us understand the universe and our existence, delineate good and evil, and teach us how to thrive through adversity. Representations of dreams and nightmares, fictional creatures, and gods and monsters are made real through visual portrayals in fantasy art. Fantasy illustration interprets the imagination of the “undiscovered self.”

Accompanying the exhibition is a 256-page companion catalogue published by Abbeville Press. Featuring essays by regarded illustrators and historians, the book is available online and in the Museum store.

The exhibition Enchanted: A History of Fantasy Illustration is organized by the Norman Rockwell Museum in Stockbridge, MA, and will be on view from June 12 through October 31, 2021. This exhibition will then travel nationally to a limited number of additional museums. The Museum plans an outdoor exhibition to continue the world of fantasy, in 3-D sculptural installations, across the 36-acre campus.