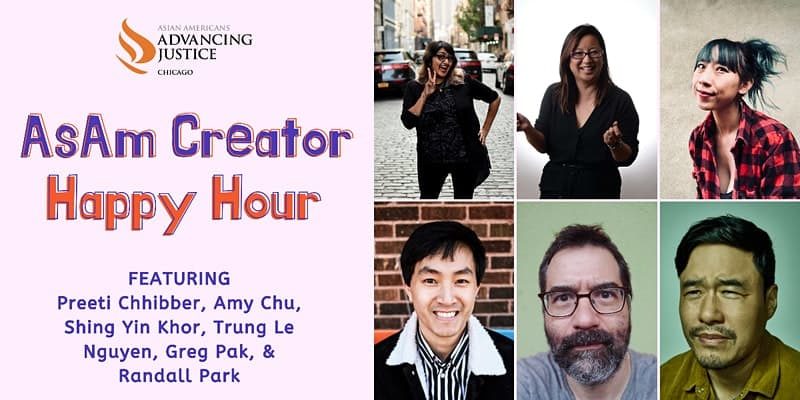 Join us on Thursday, April 22 at 8pm EST for AsAm Creator Happy Hour: 60 minutes of hijinks with Asian American writers, artists, and actors talking about how they got started, what they’re working on, and where they’re going in a fundraiser to support Asian Americans Advancing Justice | Chicago‘s bystander intervention training.

Register for free at the link…

Preeti Chhibber is a speaker, freelance writer, and author of A Jedi You Will Be, Avengers Assembly: The Sinister Substitute, and featured in the forthcoming anthology Sword Stone Table.

Amy Chu is a professional writer whose works include the Netflix series DOTA: Dragon’s Blood, graphic novel Sea Sirens, and comics such as Sensational Wonder Woman, DMC, and KISS. Amy is also a former Executive Director of the Asian American Arts Alliance and Board Member of the Asian Women Giving Circle.

Shing Yin Khor is an installation artist and cartoonist exploring the Americana mythos and new human rituals. They are the author of The American Dream? and The Legend of Auntie Po.

Randall Park is an actor, comedian, writer, and director known for his role in the TV series Fresh Off the Boat and films including Always Be My Maybe and Ant-Man and the Wasp.

Geeks OUT Schedule for NYCC 2022