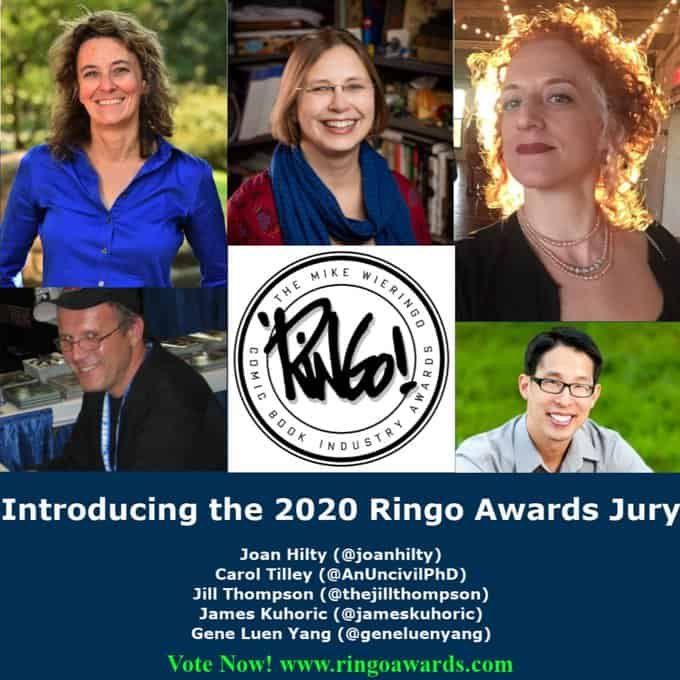 The Mike Wieringo Comic Book Industry Awards is an annual celebration of the creativity, skill, and fun of comics. The awards will be presented on Saturday, October 24, 2020 as part of the fan- and pro-favorite convention, The Baltimore Comic-Con.  The Ringo Awards is currently in the midst of the 2020 nomination process, which is inclusive of fans and comic book professionals alike. Please submit your nominations before voting closes at midnight on June 25, 2020.

An esteemed jury of comics professionals will participate in the nomination process, selecting favorite works in over 20 categories. The 2020 jury was chosen as a representative cross-section of the comic book industry, with members representing seasoned and venerated educators, publishers, press, and creators across numerous genres.

Joan Hilty directs comics and graphic novel licensed publishing at Nickelodeon, and is a founder and consulting editor-in-chief of the book producer Pageturner. She has been a senior editor at DC Comics/Vertigo and a syndicated cartoonist. She serves on programming committees for the Brooklyn Book Festival and Miami Book Fair, and teaches at the School of Visual Arts in New York City.

James Kuhoric is a multi-award-winning author, editor, and publisher of comics. He has worked with many studios writing high profile licensed comic books, including Stargate SG-1, Battlestar Galactica, The Six Million Dollar Man, and the fan-favorite mash-up, Freddy vs. Jason vs. Ash. He created the western horror series Dead Irons with Jae Lee and Jason Shawn Alexander, as well as the whimsical Legendary Talespinners with Grand Bond. His love of horror comics and movies has led to successful scripting runs on Army of Darkness, Adam Green’s Hatchet, and Beware the Witch’s Shadow comics. He has been a Managing Editor at Avatar Press, a Director of Purchasing at Diamond, and is currently a Vice President at Dynamite Entertainment. Kuhoric is also the President of American Mythology Comics which can be found at www.americanmythology.net, on Twitter @AmericanMytho, and on Facebook @AmericanMythologyComics.

Jill Thompson is a ten-time Eisner Award-winning comic book creator. She is best known for her creations The Scary Godmother and Magic Trixie, her award-winning graphic novel Wonder Woman: The True Amazon, as well as her collaborations with Neil Gaiman on The Sandman, Grant Morrison on The Invisibles, Will Pfeifer on Finals, Evan Dorkin on Beasts of Burden, Mick Foley on Tales From Wrescal Lane, and many more. Jill’s comic work has been translated into many languages and she loves to travel around the world to appear at comic conventions and festivals to meet her wonderful fans! The Scary Godmother has been adapted to the stage as a play, and then to television for Cartoon Network! Jill is actively working to create more Scary Godmother in every form for everyone to enjoy! You can follow her on Instagram @ thejillthompson or Twitter @ thejillthompson. You can buy beautiful Scary Godmother dolls and other cool stuff at www.thescarygodmother.com

Comics historian Carol Tilley is an associate professor in the School of Information Sciences at University of Illinois. Her 2012 research on anti-comics advocate Fredric Wertham was featured in the New York Times and other media outlets. Currently she is working on a cultural history of how young readers read, used, and subverted comics in the mid-20th century US to create a vibrant popular print culture. Tilley is a past president of the Comics Studies Society and was a 2016 Will Eisner Comics Industry Awards judge.

Gene Luen Yang writes, and sometimes draws, comic books and graphic novels. As the Library of Congress’ fifth National Ambassador for Young People’s Literature, he advocates for the importance of reading, especially reading diversely. American Born Chinese, his first graphic novel from First Second Books, was a National Book Award finalist, as well as the winner of the Printz Award and an Eisner Award. His two-volume graphic novel Boxers & Saints won the L.A. Times Book Prize and was a National Book Award Finalist. His other works include Secret Coders (with Mike Holmes), The Shadow Hero (with Sonny Liew), Superman from DC Comics (with various artists), and the Avatar: The Last Airbender series from Dark Horse Comics (with Gurihiru). In 2016, he was named a MacArthur Foundation Fellow. His most recent books are Dragon Hoops from First Second Books and Superman Smashes the Klan from DC Comics.

“We amassed a really strong jury for this year’s Ringo Awards,” said Marc Nathan, Baltimore Comic-Con promoter. “It is an amazing cross-section of the industry, with multiple award-winning creators, educators, and comics veterans bringing their experience and expertise to the table. We’re looking forward to another fantastic final ballot this year.”