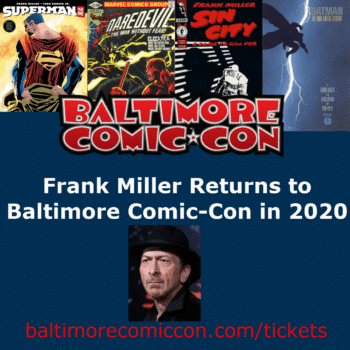 BALTIMORE, MARYLAND – March 5, 2020 – You won’t want to miss the 2020 Baltimore Comic-Con, taking place October 23-25 at the Inner Harbor’s Baltimore Convention Center. The Baltimore Comic-Con is ecstatic to announce the return of Frank Miller, who will be in attendance on Saturday, October 24th.

Frank Miller is a comic book writer and artist, a screenwriter, a film director, and a movie producer. Originally from just down the street in Olney, MD, Frank was raised in Montpelier, VT, and eventually found his way to New York City and the comic book industry in the late 1970s. Finding work in Gold Key Comics initially, he went on to work with DC and Marvel.

At the latter, after recurring fill-in and cover artist gigs, he took over art and, eventually, writing duties on Daredevil. He co-plotted the Wolverine limited series with Chris Claremont, and would continue working on titles (his own and those of the companies for which he worked) including Ronin, Daredevil: Born Again, Elektra Lives Again, The Dark Knight Returns, Sin City, and 300. In addition to his comic book work, Miller wrote the scripts for Robocop 2 and 3, directed the film version of The Spirit, shared directing duties with Robert Rodriguez on the Palme d’Or-nominated Sin City and Sin City: A Dame to Kill For, and produced the film 300. Eagle-eyed viewers can spot him in cameo roles in Robocop 2, Daredevil, Sin City, Sin City: A Dame to Kill For, and The Spirit. Miller is known for creating Elektra for Marvel Comics’ Daredevil series, and a female version of the Robin character, Carrie Kelley, for DC Comics.

Miller will be appearing on Saturday only, and a limited number of tickets are available for fan interaction during his appearance. To purchase tickets to the Baltimore Comic-Con and the Frank Miller Gold and Silver tickets specifically, please see our tickets webpage.

“We are so happy Frank could come back again this year!” said Marc Nathan, show promoter for the Baltimore Comic-Con. “He was unable to join us in 2019, but we’ve really enjoyed having him to the show, and bringing him back to Baltimore is a huge deal. His work has been so influential to the comics industry, not to mention his impact to the entertainment industry in general, and his fans won’t want to miss out on this opportunity to meet him.”

General Admission and VIP Package tickets for Weekend, Friday, Saturday, and Sunday are now on sale! Visit www.baltimorecomiccon.com/tickets/ for more information and to purchase your advanced tickets now, and as always, kids 10 and under get into the show free with a paid adult General Admission!

In the coming weeks, look for more announcements from the Baltimore Comic-Con. We are looking forward to highlighting our guests, the Ringo Awards, industry exclusives, and programming. The latest developments can always be found on our website, Twitter, Instagram, and Facebook pages, and follow us on Snapchat.

Please use the following e-mail addresses to contact the Baltimore Comic-Con:

press@baltimorecomiccon.com – for any general press inquiries or to be added to our PR distribution

registrar@baltimorecomiccon.com – for inquiries about submitted registrations

The Baltimore Comic-Con is celebrating its 21st year of bringing the comic book industry to the mid-Atlantic area. For more information, please visit www.baltimorecomiccon.com.