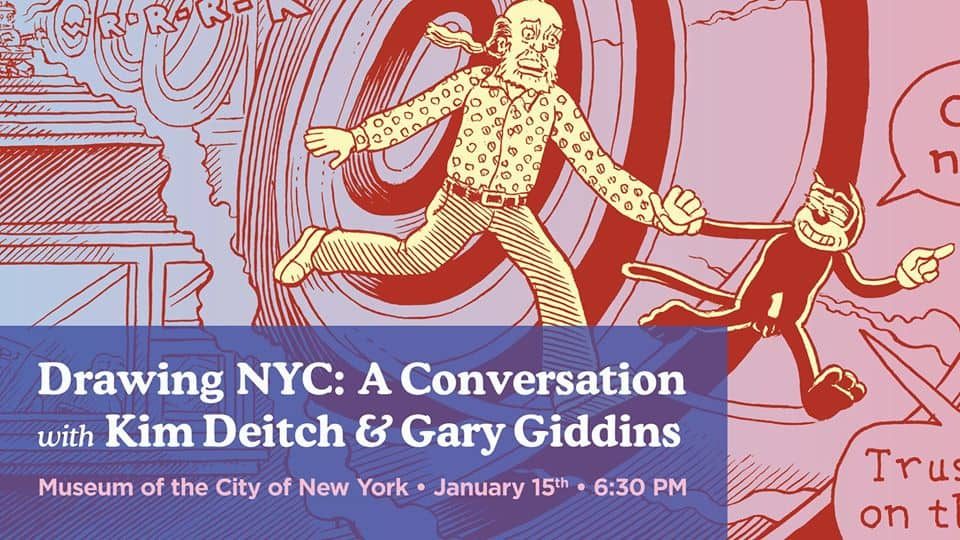 Join graphic novelist and Underground Comics legend Kim Deitch and jazz critic and historian Gary Giddins on Wednesday, January 15, 2020 at 6:30 PM for a discussion of the factual and fictional New York geography created by Deitch in his latest book, Reincarnation Stories (Fantagraphics, 2019). With settings ranging from Central Park to the surface of the moon, and a cast of characters including a feline jazz pianist, cartoonist Spain Rodriguez, Jesus Christ as an intergalactic conqueror, Frank Sinatra, and Deitch himself, Reincarnation Stories blends the familiar with the fantastic.

About the Speakers:
Kim Deitch got his start doing comic strips for The East Village Other in 1967 and in 1969 he succeeded Vaughn Bodé as editor of the Other’s underground comics tabloid. His Boulevard of Broken Dreams was named one of Time’s “100 Best Graphic Novels Ever Written” and he has been awarded an Eisner Award and an Inkpot Award for his work. His newest book is Reincarnation Stories (Fantagraphics, 2019). Deitch remains a true cartoonists’ cartoonist, adored by his peers as much as anyone in the history of the medium.

Gary Giddins joined The Village Voice in 1973, and a year later, later introduced his column “Weather Bird,” which ran through 2003, garnering six ASCAP Deems Taylor Awards for Excellence in Music Criticism. In recent years, Giddins had contributed articles about jazz to The New Yorker, Jazz Times, The New York Times, The Atlantic, The Nation, Esquire, Vanity Fair, and many other publications. He has received many awards for his work, including a Peabody, a Grammy, and a Guggenheim Fellowship. Giddins has also just completed the second (of three) volumes of his Bing Crosby biography.