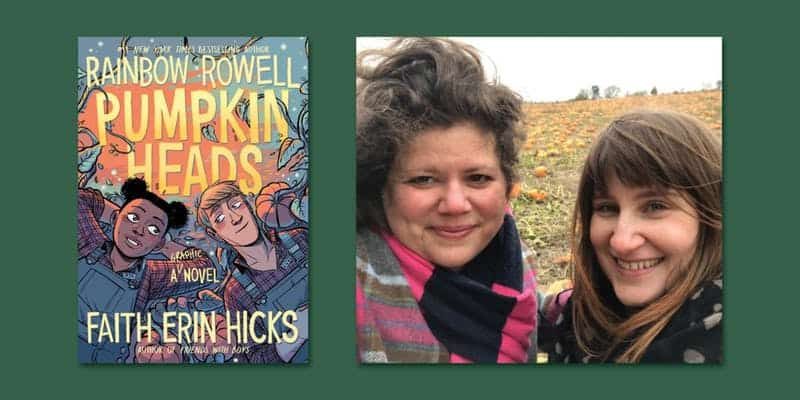 Writer Rainbow Rowell and artist Faith Erin Hicks appear to present and sign their new graphic novel Pumpkinheads from First Second at the Cuyahoga Library on Wednesday, August 29, 2019 at 7 PM. Get tickets here…

But this Halloween is different—Josiah and Deja are finally seniors, and this is their last season at the pumpkin patch. Their last shift together. Their last good-bye.

Josiah’s ready to spend the whole night feeling melancholy about it. Deja isn’t ready to let him. She’s got a plan: What if—instead of moping and the usual slinging lima beans down at the Succotash Hut—they went out with a bang? They could see all the sights! Taste all the snacks! And Josiah could finally talk to that cute girl he’s been mooning over for three years . . .

What if their last shift was an adventure?

Faith Erin Hicks is a writer and artist living in Vancouver, British Columbia. Her previous works include the Nameless City trilogy, Avatar: The Last Airbender (with Peter Wartman), Friends with Boys, The Last of Us: American Dreams (with Neil Druckmann), Nothing Can Possibly Go Wrong (with Prudence Shen), and the Eisner Award–winning The Adventures of Superhero Girl.