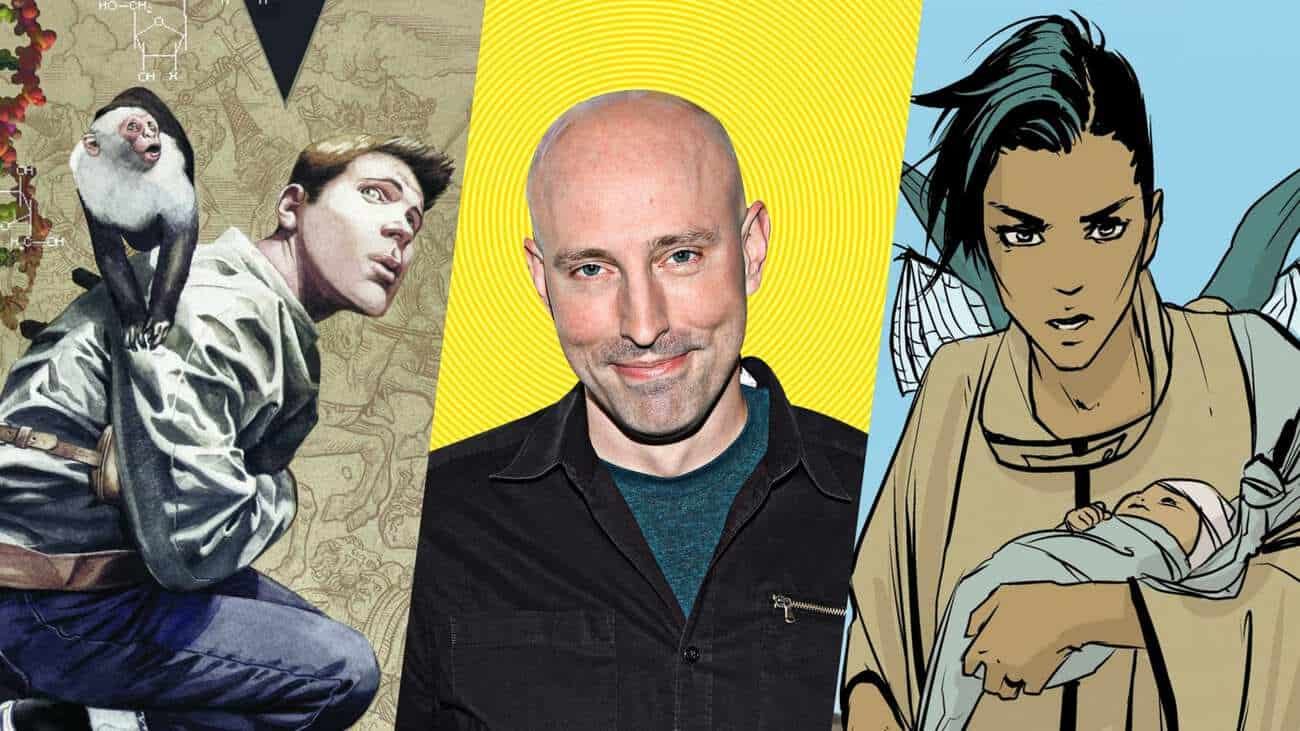 Brian K Vaughan (or BKV for short) is the writer and co-creator of the critically acclaimed Saga, Y: The Last Man, Ex Machina, Runaways, Pride of Baghdad, The Hood, The Escapists, The Private Eye, a digital comic with artist Marcos Martin at PanelSyndicate.com, and, most recently, Paper Girls.

Vaughan’s professional comics writing career began at Marvel Comics on Tales From the Age of Apocalypse. He later went on to write for some of Marvel’s highest-profile characters, including Spider-Man, Captain America, and the X-Men, as well as penning noteworthy limited series such as Doctor Strange: The Oath and The Hood. He went on to write for DC Comics, where he wrote Batman and Green Lantern: Circle of Fire, and Dark Horse Comics, writing for Buffy the Vampire Slayer Season Eight.

Vaughan began writing series featuring his own characters. Y: The Last Man
is a 60-issue post-apocalyptic science fiction series about the only man to survive the apparent simultaneous death of every male mammal on Earth. Published through DC’s Vertigo imprint, the series received Eisner Awards in 2005 and 2008, and numerous other nominations. Adaptation to screen has been a long time coming, and after a series of false starts, Y: The Last Man will finally see the transition from page to screen in 2020 at FX. Vaughan will executive produce and developed the series.

Vaughan’s Ex Machina ran from 2004-2010, and is a political thriller featuring Mitchell Hundred. Hundred, an ex-superhero known as the Great Machine, performed great acts of heroism during the 9/11 attacks in 2001, and is elected Mayor of New York City as a result. Set during Hundred’s term in office, and interwoven with flashbacks to his past as the Great Machine, the series explores both the political situations Hundred finds himself in and the mysteries surrounding his superpowers. New Line Cinema purchased the film rights to the series in July 2005, and commissioned Vaughan to write one of the two commissioned scripts, which he was reported to be working on in 2007.

The epic space opera/fantasy series Saga debuted in 2012 through Image Comics. Working with artist Fiona Staples, the series depicts two aliens from warring races trying to survive with their newborn daughter. The first issue sold out of its first printing ahead of its March 14 release date, with a second printing ordered for April 11, the same release date for issue #2. The series has been extremely well-reviewed by comics press, book press, and general media, and it has also appeared on the New York Times Graphic Books Best Seller List. It won three Eisner Awards in 2013, a Hugo Award, and was nominated for seven Harvey Awards, including wins in 2013-2016 for Best Continuing or Limited Series, in addition to multiple individual nominations for both Vaughan and Staples.

Vaughan’s Paper Girls is a mystery/science fiction series, with illustrator by Cliff Chiang, from Image Comics. Paper Girls follows the story of four 12-year-old newspaper delivery girls in Stony Stream, a fictional suburb of Cleveland, OH who, while out delivering papers on the morning after Halloween, find themselves in the midst of an invasion from a mysterious force from the future. The girls become unwillingly caught up in the conflict between two warring factions of time-travelers. Paper Girls won two Eisner Awards in 2016 for Best New Series and Best Penciller/Inker. In 2017, the first compilation was shortlisted for the Hugo Award for Best Graphic Story, and received a Best Series nomination for the inaugural Ringo Awards.

In addition to his comic writing, Vaughan was a writer, executive story editor, and producer for seasons 3 through 5 of the ABC television series Lost. He was also a co-producer on Lost: Missing Pieces, a spinoff Internet short-film series produced during the hiatus between the show’s third and fourth seasons. In 2011, Vaughn was chosen by Steven Spielberg to adapt the Stephen King novel Under the Dome as a television series, where he served as showrunner and executive producer of the series for the first season.

“This is really exciting for us” said Marc Nathan, show promoter for the Baltimore Comic-Con. “We spoke to Brian years ago about coming to the show, and we’ve never been able to quite get the planets in alignment ever since. He is one of the foremost comics writers of our time, and his work features an almost magical combination of plotting, pacing, characterization, conflict, and motivation. Baltimore Comic-Con fans are going to be ecstatic to meet him!”