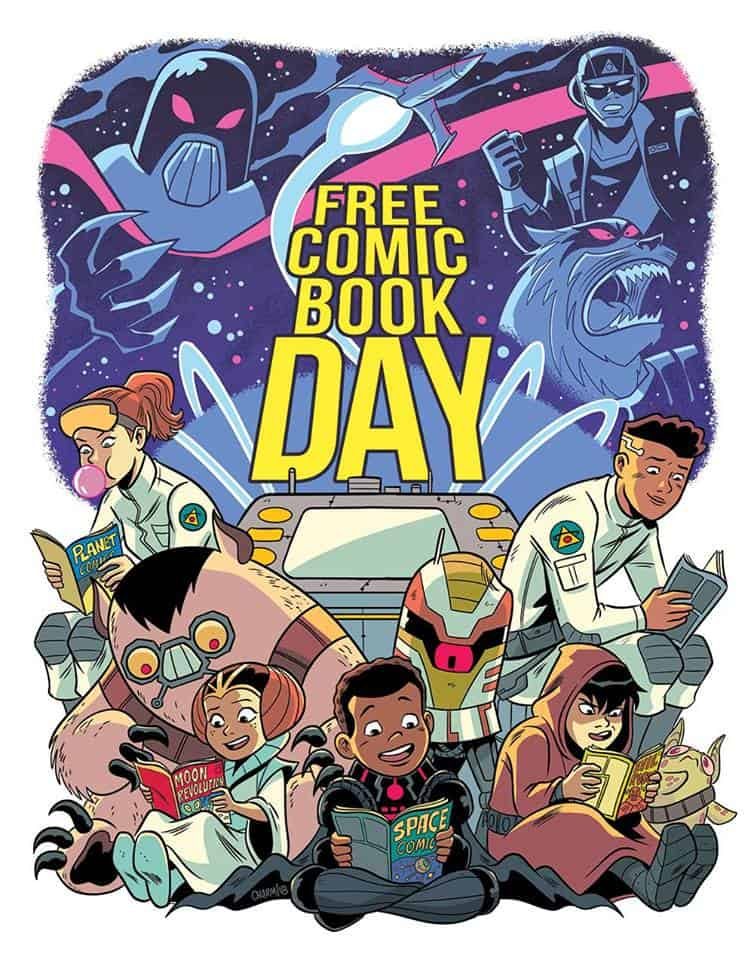 This year, publishers have created an amazing array of special offerings for the biggest day in comics! We will have a wide range of books for young readers, new readers, long-time fans, and and older readers interested in revisiting this remarkable art form. We will be giving away free comics from a wide selection of titles all day, beginning at 11:00 am and continuing until we close at 8:00 pm. While some titles may run out during the day, we will have plenty of free books, so don’t worry about missing out.

Publishers have also produced an impressive array of bargain priced ($1 or less) versions of key books featuring some of comics’ most popular characters, so this is a great way to check out some of comics’ finest, both old and new.

As always, we will have an incredible array of talented creators at this year’s Free Comic Book Day. Creators who have confirmed that they will join us between 12:30 pm and 2:00 pm include:

Mark Bagley – Mark holds the record of having illustrated more Spider-Man comics than any other artist–not only did he draw an amazing run of Amazing Spider-Man issues, but he also (with writer Brian Michael Bendis) produced an incredible 100+ issue run of Ultimate Spider-Man–in fact, they hold the record for the longest uninterrupted run by the same creative team on any superhero series! Mark’s work has appeared in Fantastic Four, Justice League, Batman, All-New X-Men, and many other titles; he is currently working on the real-time Spider-Man: Life Story series for Marvel.

Julie Hadden Barclay – Julie is a talented colorist whose vibrant work has appeared in Action Lab’s Hero Cats and Midnight series. She has worked with  Dean Motter (another Dr. No’s Free Comic Book Day guest!) on a Mister X project, and she and Dean are right in the middle of another top-secret project that you’ll hear much more about in the near future. (And for those who don’t know, Julie is a long-time member of the Dr. No’s family, having worked with us for many years prior to pursuing her full-time career as a colorist, so we are particularly proud to have her joining us!)

Kristina Deak-Linsner – Artist, Creative Editor, Writer, Reference model & all-purpose Joe wrangler at Linsner Industries. Founder of Lightisthenewdark art studios. Kristina Deak-Linsner has brought her years of fine art experience in the west coast gallery scene over to the house that Dawn built. After beginning her comics career at Dynamic Forces in the late 90’s, she now uses her keen eye to help guide all Linsner products and projects such as: Sin Boldly, the Dawn & Vampirella crossover series, as well as Linsner’s annual Dawn Sketchbooks (2011 to present). The graphic novel Dawn & Vampirella brings her comics career full circle by working with Dynamite/Dynamic Forces once again. She is currently working on the Vampirella series Roses For The Dead.

Dan Fraga – Dan is an accomplished comics writer and artist who has worked for Marvel, Image, Extreme Studios, and others, illustrating such characters as Spider-Man, Wolverine, Youngblood, Avengelyne, Witchblade, and many others. Dan is also a storyboard artist, animator, director, and Youtube show host. His most recent work, the fascinating graphic novel The Grave (which was produced one panel per day for a year) is scheduled for release from IDW just in time for Free Comic Book Day 2019.

Georges Jeanty – Eisner Award-winning, New York Times bestselling comic book illustrator, whose first major work was Marvel Comics’ Bishop: The Last X-Man (1999).
Along with his work on many Marvel and DC Comics titles, Georges is known for the critically acclaimed, sixties-era graphic novel The American Way (2006) written by screenwriter John Ridley and published by DC Comics, its sequel The American Way: Those Above and Those Below (2017), and being a regular artist for Dark Horse Comics’ official continuation of Buffy the Vampire Slayer and Serenity (2007-2018). Currently, his work can be seen in Age of X-Man: The Ex-tremists, part of Marvel’s “Enter the Age of X-Man” story arc.

Joseph Michael Linsner – Joseph Michael Linsner has been writing and drawing the adventures of his creation Dawn since her first appearance in Cry For Dawn #1 in 1989. An award winning illustrator, Linsner has painted covers for all the major comics companies, adding his personal touch to Wolverine, The Black Cat, Conan, Killraven, Witchblade, Vampirella , and Harley Quinn, among others. He is currently working on Vampirella: Roses For The Dead and the next installation of his Dawn series.

Dean Motter – Writer, artist, and creator of Mister X, Dean has been in the business for a quarter-century. He is also the writer and artist of the recently-reprinted Prisoner graphic novel based on the classic 1960s TV series, as well a the creator and writer of Terminal City and Electropolis. Dean’s work has appeared in Batman: Gotham Knights, Wolverine, Batman: Nine Lives, Star Wars Tales, and many other books; he is currently working with colorist Julie Barclay (another Dr. No’s Free Comic Book Day guest) on a new top-secret project that you’ll hear much more about in the very near future.

Jocelyn & Crystal Potter – Identical twins, Crystal and Jocelyn Potter, were born in San Antonio, Texas. Crystal being the oldest by just two minutes. Following their entrepreneurial spirit and creative passions, they embarked on a successful entertainment career in Los Angeles. For over ten years they worked as both glamour models and actresses appearing in print, film, and television. Together they’re collaborating on an auto-biographical comic book series titled Trophy Girls, which follows their unique adventures in Los Angeles. Staying true to the facts and depictions, the series is both entertaining and a life lesson on the tumultuous ups and downs of the entertainment industry.

Jorge Santiago Jr. – Jorge burst into comics as the artist of the acclaimed series Spencer and Locke, but that’s not his only professional comics work. Jorge is also the writer and illustrator of Curse of the Eel, Requiem Sonata, and Rare Drops, among other projects. He is currently working on Spencer & Locke 2, the sequel to his his Spencer & Locke series.

Wayne Vansant –  Wayne is the acclaimed illustrator of The ‘Nam, Days of Darkness, The Hammer & The Anvil, Normandy: Bombing Nazi Germany, Katusha, The Red Baron, and other tales of the Civl War, WWI, and WW2. Vansant is a military and war history expert as well as an talented artist and writer.

Rod Whigham – Legions of comics fans thrilled to Rod’s art on Marvel’s GI Joe and DC’s Doc Savage and Star Trek. He has also illustrated the adventures of Conan, the Shadow, the Justice League, Ghost Rider, The Flash, and the Punisher, among others. He is the co-creator (with fellow Atlantan Lamar Waldron) of the graphic novel Lightrunner. Rod is also the illustrator of the syndicated comic strip Gil Thorp.