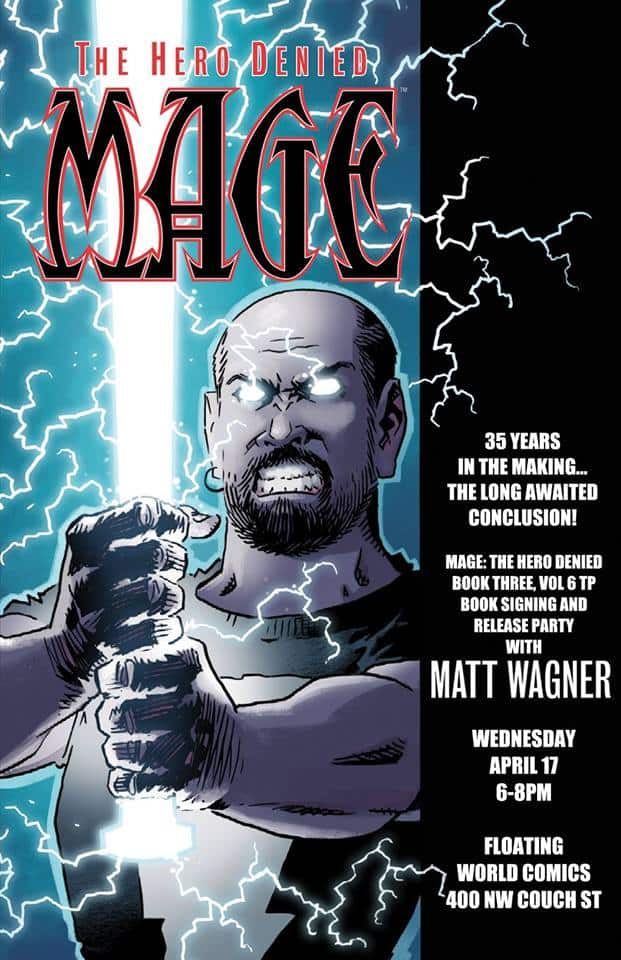 The last of six volumes collecting MATT WAGNER’s epic, modern-day fantasy trilogy, MAGE—BOOK THREE: THE HERO DENIED is the long-awaited conclusion to the saga of the reborn Pendragon, Kevin Matchstick. After his mystical enemies destroy his home and kidnap half his family, Kevin must return to his heroic path and again draw forth the power of Excalibur. Will the long-prophesied third Mage finally appear at last? Or will the Pendragon’s fear for his family’s safety leave the mysterious Fisher King a victim to the sinister schemes of the Umbra Mother and her Gracklethorns?

35 years in the making, this is a landmark release for local creator Matt Wagner and a milestone in independent comics. We are honored to host this release party and book signing on Wednesday, April 17th.

Matt Wagner has enjoyed a career in comics for over thirty years and is best known for one of comicdom’s most respected creator-owned titles—the centuries-spanning epic Grendel and his more personal fantasy allegory MAGE. As both a writer and an artist, Matt has also worked on a wide variety of established characters over the years including memorable projects starring DC Comics icon Batman. Lauded for his character-driven stories and his obvious love of world history and mythologies, Matt’s efforts have won multiple Eisner Awards.