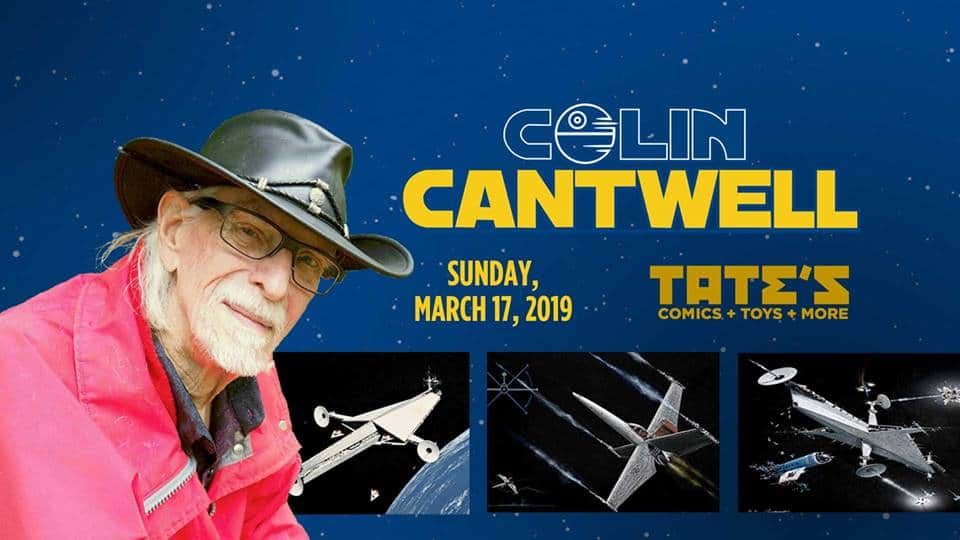 Join Colin Cantwell at Tate’s Comics on Sunday, March 17, 2019 from Noon till 3 PM for a special presentation, Q&A and autograph session!

Star Wars ship designer, Colin Cantwell, was the original concept artist and modeler for all things that flew in the first Star Wars movie, “A New Hope”. His designs include the X-Wing, TIE Fighter, Death Star, Star Destroyer, original Millennium Falcon, Y-Wing and others. Developing the process of “Kitbashing” to build the ships, he revolutionized the modeling industry by tearing apart model kits of cars, boats and planes and re-constructing the pieces into objects such as the Star Wars ship models. In addition to his contribution to Star Wars, Colin has been involved in several other iconic projects.

This event will feature a fascinating presentation by Colin Cantwell, where he describes his various projects including: – His Star Wars’ ship designs/models, scene designs & his work with Lucas – His contributions to the success of “2001: A Space Odyssey” – How he worked with Walter Cronkite on the First Moon Landing; – His work at NASA – Plus Colin’s work in War Games, Buck Rogers, Close Encounters and more!

The presentation and Q&A portions of this event are free. There will be a charge for autographs and photos, for more details please visit colincantwell.com

In honor of this visit, we will be offering 10% OFF All of our Star Wars merchandise all day on 3/17/19! No coupon required!