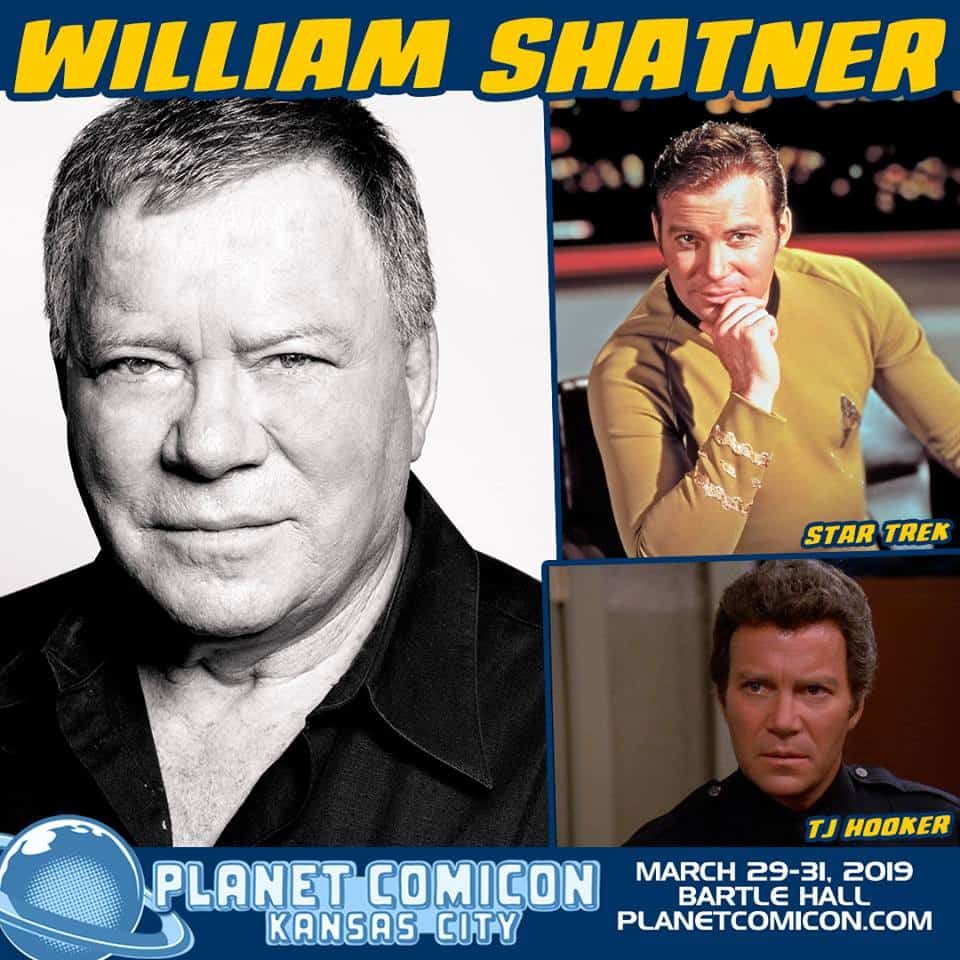 Planet Comicon KC is excited to welcome William Shatner to our 20th anniversary event. He became a cultural icon for his portrayal of James T. Kirk in the Star Trek franchise. He will be attending Friday and Saturday only!

Buy tickets now at the link…

William Shatner has cultivated a career spanning over 50 years as an award-winning actor, director, producer, writer, recording artist, and horseman. He is one of Hollywood’s most recognizable figures and a major philanthropist.

His accomplishments in television, film, and stage would take a great deal of time and more space than allotted here.

In 1966, Shatner originated the role of “Captain James T. Kirk” in the television series Star Trek. The series spawned a feature film franchise where Shatner returned as Captain Kirk in seven of the Star Trek movies, one of which he directed.

He won Emmys and his first Golden Globe for his portrayal of eccentric lawyer “Denny Crane” on both The Practice and Boston Legal. He received four more Emmy nominations as well as other Golden Globe and SAG Award nods.

Shatner’s Raw Nerve, which aired on Bio, was his own edgy, celebrity interview series. Each episode showcased Shatner getting to know his guest on an intensely personal level, touching upon subjects not normally visited on other talk shows. Guests have discussed topics such as addiction, grief, childhood, marriage, combat and parenthood.

Off the screen and broadcast waves, Shatner has authored nearly 30 best-sellers in both the fiction and non-fiction genres. His autobiography, Up Till Now, was a New York Times best-seller and was followed by Shatner Rules which was released in October 2011. William Shatner’s new book, Hire Yourself, was released in May 2015.

A comic book series – William Shatner Presents – debuted in summer 2009. The series is based on three novels of Shatner’s: Tek War, Man O’ War, and Quest for Tomorrow, along with a brand new title: Chimera.

Shatner continues to act, write, produce and direct while still making time to work with charities and further his passion in equestrian sports. He and his wife, Elizabeth and three married children live in Los Angeles.

Colin Solan - January 28, 2022 0
INCOMING TRANSMISSION FROM FULCRUM This is a new day. A new beginning. Ahsoka Tano is here and ready to fight for what’s right in Denver....