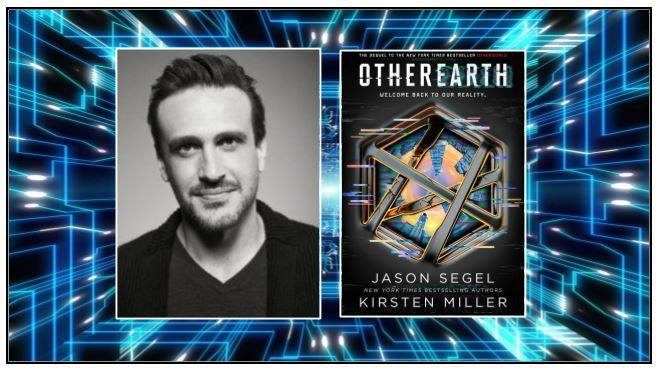 Join Book Revue for an evening with actor Jason Segel (Freaks & Geeks, How I Met Your Mother, The Muppets) and his co-author Kirsten Miller, as they speak about and sign copies of their new YA novel, OtherEarth on Tuesday, October 30, 2018 at 7 PM.

About the book:
Return to the series BuzzFeed compared to Ready Player One in the second book in a new fast-paced trilogy from New York Times bestselling authors Jason Segel and Kirsten Miller that’s perfect for fans of HBO’s Westworld.

Simon would have done anything to save his best friend after a mysterious accident almost killed her–including follow her into a virtual world. And what he and Kat discovered there was more terrifying than they could have ever imagined. Unwitting hospital patients are being forced to test a device that lets VR be experienced with all five senses. The technology is so advanced that it’s deadly.

Now the world’s biggest tech corporation is hunting Simon and Kat while war rages in Otherworld, the virtual world it created. Determined to destroy the Company, Simon and Kat must join forces with a hacker, a gangster, and a digital entity. But as they battle to save two worlds, they uncover an all-new threat to our world: the Company’s latest creation, an augmented-reality game called OtherEarth. Not only does OtherEarth kill, it has the power to erase the line between what’s real and what’s fantasy.

IMPORTANT!
All books signed at Book Revue events must be purchased at Book Revue. If you purchase the book prior to the event please save your Book Revue receipt. If you have purchased the book from somewhere else you can still get your book signed, we just ask that you make a purchase in our store of equal or greater value to that of the book.

PLEASE NOTE:
Though the event end time states 9PM, the event is over once the author has signed the last book, which may be before OR after the time mentioned. If you are coming late to an event, please call our store to get updated information regarding the approximate end time of the event. 631-271-1442