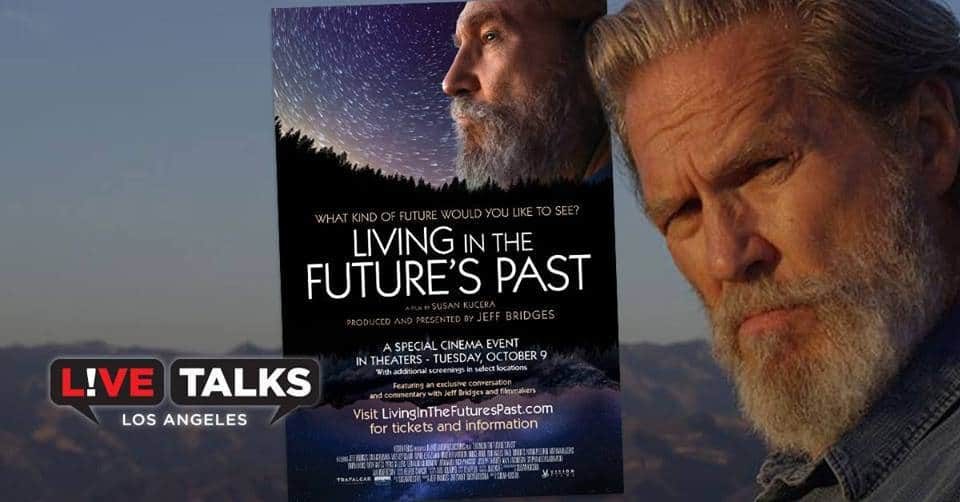 Jeff Bridges appears in conversation with Sam Rubin on Monday, October 1, 2018 at 8 PM to share clips from and discuss his documentary Living in the Future’s Past. Presented by Live Talks Los Angeles.

Jeff Bridges’ Award-Winning Documentary ‘Living in the Future’s Past’ Brings a Fresh Perspective on Being Human for our Challenging Times and Asks “What Kind of Future Would You Like to See?”

Jeffrey Leon “Jeff” Bridges is an American actor and musician. His most notable films include The Big Lebowski, King Kong, The Last Picture Show, Thunderbolt and Lightfoot, Tron, Starman, The Fabulous Baker Boys, Seabiscuit, K-PAX, The Fisher King, Fearless, The Contender, Iron Man, Tron: Legacy, True Grit and Crazy Heart, for which he won the Academy Award for Best Actor in a Leading Role at the 82nd Academy Awards.

Living In The Future’s Past, a beautifully photographed tour de force produced and presented by Jeff Bridges who explores who we are, where we come from, how we think and why we do the things we do. Bridges shares the screen with profound thinkers, scientists, and a dazzling array of the Earth’s creatures to reveal profound concepts about ourselves and our future in ways that have never been presented quite like this on film before.

Living in the Future’s Past bypasses ideological traps and looks under the “hood of humanity” incorporating elements of evolution, neuropsychology, emergence, ecology and energy into a paradigm shift in the way we think about environmental challenges.

Living in the Future’s Past premiered at Santa Barbara International Film Festival.

Sam Rubin is the entertainment reporter for the KTLA Morning News. Rubin hosts the Emmy-nominated “Live from the Academy Awards,” syndicated nationally by Tribune Entertainment, “Sneaks,” a series of movie preview shows produced in conjunction with the Los Angeles Times, as well as a show for the Reelz Channel. He is a recipient of a Golden Mike Award for Best Entertainment Reporter from the Radio & Television News Association and, as part of the KTLA Morning News team, earned an Associated Press Television-Radio Award for Best News Broadcast.