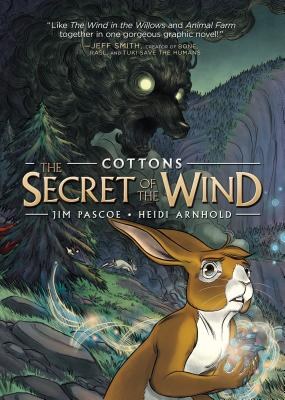 Jim Pascoe and Heidi Arnhold appear in conversation with Cecil Castellucci at Skylight Books on Tuesday, July 3, 2018 at 7:30 PM to present and sign Cottons: The Secret of the Wind from First Second.

To her neighbors in the Vale of Industry, Bridgebelle is an ordinary rabbit. All day long, she toils at the carrot factory. After a hard day, she returns home to care for her ailing auntie. And whenever she’s out, she’s watchful of the murderous foxes who prey on her kind.

But Bridgebelle is not ordinary—she’s a rabbit with talents beyond her own understanding. Using cha, the mysterious fuel that powers her world, she can change everyday objects into thokchas—magical, transforming works of art. Bridgebelle makes thokchas because they’re beautiful. But there are those in her world who want to harness her powers and turn her art into a weapon.

Jim Pascoe is a writer, designer, and an award-winning creative director. His comics credits include Buffy the Vampire Slayer, Hellboy Animated, and the original series Undertown. He lives in Los Angeles, where he drinks coffee, sleeps very little, and believes in magic.

Heidi Arnhold is a graduate of the Savannah College of Art and Design whose published works have involved popular franchises like Star Trek, The Dark Crystal, and Fraggle Rock. The art in Cottons is powered by Heidi’s love for visual storytelling, all rabbits, and kale smoothies.

Cecil Castellucci is the author of books and graphic novels for young adults including Boy Proof, The Plain Janes, The Year of the Beasts, Tin Star, and the Eisner nominated Odd Duck. In 2015 she co-authored Moving Target: A Princess Leia Adventure. She is currently writing Shade, The Changing Girl, an ongoing comic on Gerard Way’s Young Animal imprint at DC Comics. And her newest Graphic Novel Soupy Leaves Home came out in April 2017. Her short stories and short comics have been published in Strange Horizons, Tor.com, Womanthology, Star Trek: Waypoint and Vertigo SFX: Slam! She is the Children’s Correspondence Coordinator for The Rumpus, a two time Macdowell Fellow and the founding YA Editor at the LA Review of Books.