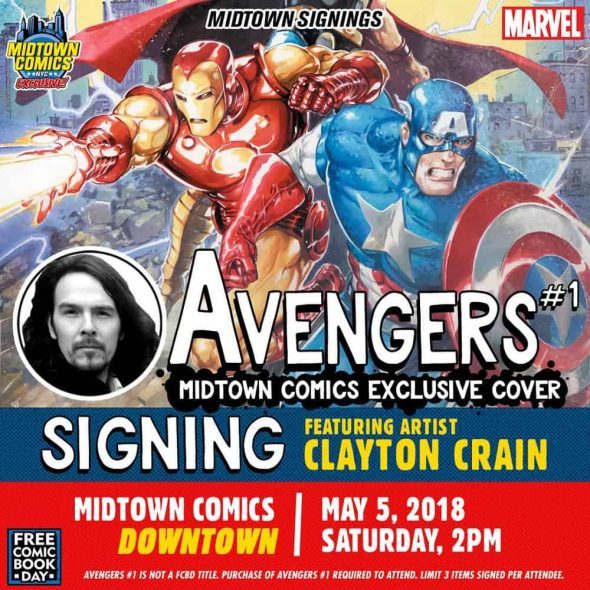 Artist Clayton Crain (Carnage, X-Force, Ghost Rider) appears at Midtown Comics Downtown on Saturday, May 5th at 2:00 PM to celebrate the launch of a new era for Earth’s Mightiest Heroes in the Midtown Comics exclusive edition of Avengers #1! This is an open signing and we recommend showing up early, just to be safe. Please note that this is NOT the FCBD Avengers title. Purchase of Avengers #1 required. Limit 3 items signed per attendee.

Thor Odinson. Steve Rogers. Tony Stark. The Big Three of the Avengers are reunited at last and just in time! The world is in danger of total annihilation as an ancient foe reemerges with devastation in mind! The 2,000 foot tall space gods known as Celestials have returned and their return heralds the coming of the Final Host! Who will answer the call to assemble for a new era of Earth’s Mightiest Heroes? And what is the strange connection between the Final Host and Odin’s ancient band of Prehistoric Avengers? The seeds laid down in Marvel Legacy #1 come to fruition as writer Jason Aaron and artist Ed McGuinness present a new age of heroes in Avengers #1!