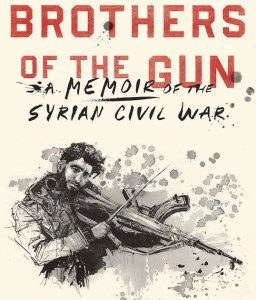 appears in conversation with Lidia Yuknavitch, author of The Book of Joan and The Small Backs of Children, at Powell’s Books on Sunday, May 20, 2018 at 7:30 PM.

Brothers of the Gun (One World) is a bracingly immediate memoir of the Syrian war from its inception to the present, by Marwan Hisham – a young man coming of age and finding his voice as a journalist – whose friends traveled divergent paths through the carnage. An intimate lens into the century’s bloodiest conflict and a profound meditation on kinship, home, and freedom, Brothers of the Gun is a story of pragmatism and idealism, impossible violence and repression, and, even in the midst of war, profound acts of courage, creativity, and hope. In Brothers of the Gun, Molly Crabapple’s vivid ink illustrations bring to life the beauty and chaos.