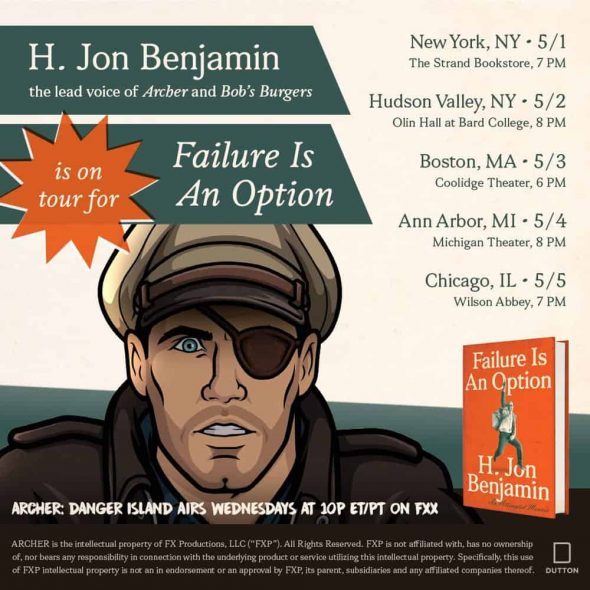 Actor H. Jon Benjamin appears at the Coolidge Corner Theatre on Thursday May 3, 2018 at 6:00 PM to present and sign his new book Failure is an Option. HJB will be joined in conversation by fellow comedian and Bob’s Burgers voice actor Eugene Mirman. Books sold by Brookline Booksmith.  Tickets available at the link!

H. Jon Benjamin—the lead voice behind Archer and Bob’s Burgers—helps us all feel a little better about our own failures by sharing his own in a hilarious memoir-ish chronicle of failure.

As Jon himself says, breaking down one’s natural ability to succeed is not an easy task, but also not an insurmountable one. Society as we know it is, sadly, failure averse. But more acceptance of failure, as Jon sees it, will go a long way to making this world a different place…a kinder, gentler place, where gardens are overgrown and most people stay home with their pets. A vision of failure, but also a vision of freedom.

With stories, examples of artistic and literary failure, and a powerful can’t-do attitude, Failure Is an Option: An Attempted Memoir is the book the world doesn’t need right now but will get regardless.