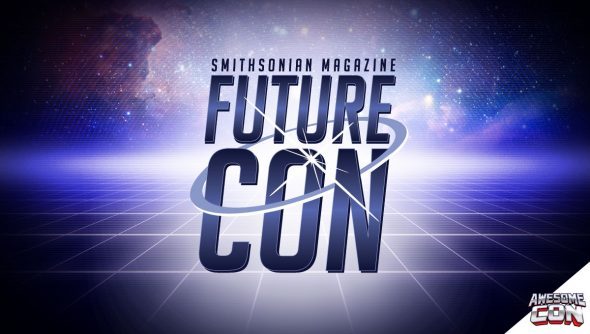 Science experts and entertainers will unite this month at the Smithsonian magazine Future Con, a themed pavilion celebrating science, technology, science fiction and fantasy within the Mid-Atlantic’s premiere pop culture convention Awesome Con. From March 30-April 1 Future Con presents three days of special programming that will include tech demos, meet-and-greet opportunities with scientific leaders and the opportunity to dive into the stimulating and fantastical overlaps between real-world science and science fiction. Attendees of all ages can engage with panels and discussions as well as hands-on tech demos and workshops, all focused on fostering awareness and enthusiasm for science, technology, engineering, and math (STEM).

“Future Con is an opportunity for all of us to think about the future in a fun and engaging way through pop culture and science fiction,” says Awesome Con Founder Ben Penrod. “It’s important to showcase the people and organizations who take inspiration from pop culture, to solve real-life problems and create a better world for us all. In 2018, we’re partnering again with the Smithsonian to bring that message to fans at Awesome Con through Future Con.”

Awesome Con is proud to welcome the brightest minds from organizations leading scientific advancement and education to Future Con, with representatives from Boeing, National Science Foundation, American Association for the Advancement of Science, Association for Psychological Science, and the Planetary Society leading programs and workshops throughout the weekend.

“Going to Future Con is like stepping into a time travel machine,” says Michael Caruso, Future Con founder and Smithsonian magazine Editor in Chief and Vice President of Live Events. “Future Con is a great mashup of science and science fiction, a way for people to experience the very real science that is making technology writers and filmmakers have only dreamed of actually come to life around us. This year, we’re partnering with some remarkably forward-thinking organizations – including NASA, Netflix, and X, The Moonshot Factory – to bring that great experience to our Future Con fans.”

Panels like Turning Science Fiction Space Travel into Science Fact presented by Boeing will bring together visionaries and engineers to share how ongoing scientific developments and research are laying the foundation for future space exploration. Learn from experts about what it takes to survive in space, travel to Mars, launch the largest rocket ever into space, and more.

Science lovers will also be able to sit in on Future Con events like the Netflix: “Lost in Space” panel presented in partnership with Netflix, an exclusive preview of the upcoming dramatic re-imagination of the classic show and an exploration of the goals of modern space travel. Attendees can stop by the Future Con pavilion and into an immersive “Lost in Space” pop-up complete with show props and décor that will be featured on the galactic adventure show.

In the panel Science behind Mad Science, X, The Moonshot Factory’s Rich DeVaul will reveal how the moonshot factory brings science fiction-sounding technologies such as driverless cars and balloon-powered internet to life. DeVaul will also share tips for aspiring moonshot takers and unveil some never-before-seen explorations. At the X booth at Future Con, show attendees will be able to see some of X’s prototypes up close and learn more about how engineers, scientists and entrepreneurs are part of X’s early-stage work. The X booth will also allow attendees to play a rapid-fire moonshot thinking game, learn about rapid prototyping and meet some of the scientists, engineers and entrepreneurs behind X’s technology.

Star Wars fans will be delighted with exhibits and events presented as part of Future Con, with franchise film stars John Boyega, Joonas Suotamo, and Jeremy Bulloch planning special appearances over the weekend.

Sci-fi movie fans can also attend a Science of “Pacific Rim” panel inspired by the blockbuster 2013 film. Dr. Rich DeVaul, Director of Mad Science at X, and Legendary Comics’ Senior Vice President of Creative Strategy Barnaby Legg clue attendees in to how close to we are to building defensive robots known as ‘jagers,’ whether we can merge consciousness and share memories and feelings with other individuals, and delve into the scientific principles explored in the film.

Future Con also takes a fun look at fiction vs. fact in the comics world, with panels like The Technology of Dark Nights: Metal featuring a discussion with “Batman” artist and writer duo Greg Capullo and Scott Snyder about the technology at the iconic character’s disposal.