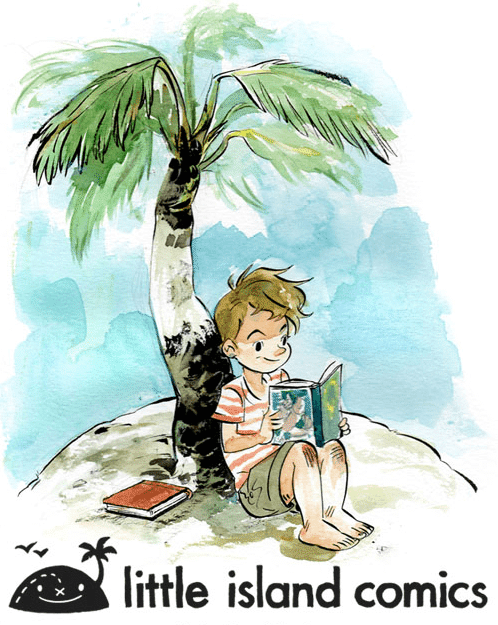 Little Island Comics is BACK!!! Offering the widest possible array of graphic novels, manga, and comics for people 12 years old and younger, Little Island celebrates its Grand Re-Opening during March Break 2018 with a slate of creator appearances, refreshments and activities– with a sale to jumpstart your library of great comics for kids!

When it opened in 2011, Little Island served thousands of young readers, grateful parents, enthusiastic educators, and cool aunts and uncles for five years until the original Mirvish Village location closed due to redevelopment. During that time Little Island was more than a retail destination — it was a local hub: a venue for comics-making classes and teacher/librarian sessions, and hosted many book launches and events with kid-lit luminaries like Tomi Ungerer (The Three Robbers), Kate Beaton (The Princess and the Pony), Kazu Kibuishi (Amulet) and Jon Klassen (We Found a Hat).

“Little Island has proven to be a key part of The Beguiling’s business overall,” says proprietor Peter Birkemoe. “I’m thrilled to once again devote space where kids and parents can learn, read and start loving comics. And we really missed giving our youngest customers the specific attention they deserve.”

A year after closing its previous Mirvish Village location, Little Island Comics re-opens in March next door to its parent shop The Beguiling’s newly expanded location at the top of Toronto’s vibrant Kensington Market neighbourhood. As The Beguiling enters its fourth decade as North America’s premier comic book retailer, the move to College Street has allowed it to add a gallery and events space, which Little Island will share.

Little Island Comics will be staffed by the same team that worked at the previous location, who also work for The Beguiling’s Library Services business, which has been helping school and  public libraries curate their comics collections for more than 15 years. Comics as a medium has become a mainstay of educational library collections in the last decade, and parents and educators will appreciate the expert help in selecting titles that address curriculum objectives, learning challenges, and a wide variety of reading levels. Kids will appreciate the engaging visual storytelling in some of today’s most popular books for young people!

Little Island will offer a 20% discount on all in-print kids comics, picture books, and graphic novels throughout March Break (March 10-18, 2018) to encourage families to dig into graphic novels! The week will culminate in a Grand Re-Opening Party on Saturday, March 17th, with refreshments, drop-in activities, story time, and appearances by such creators as:

…and more! For details on the line-up for the Grand Re-Opening, please follow Little Island Comics on Facebook and Twitter (@littleislandcmx), or check back here on the Little Island blog regularly!