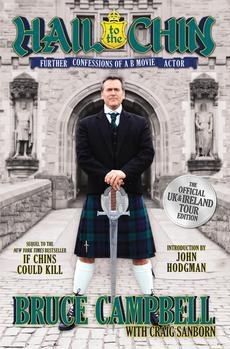 Movie legend Bruce Campbell will be appearing at the Forbidden Planet London Megastore at 6:00 PM on Tuesday 13th March, signing copies of Hail To The Chin: The Official UK & Ireland Tour Edition.

Still living the dream as a B movie king in an A movie world, Bruce Campbell makes his triumphant return with further hilarious, gut-wrenchingly honest confessions. Bruce brings us through his life in the period since his first memoir, If Chins Could Kill, and his roles as varied as they are numerous: from the Spider-Man movies to his self referential My Name is Bruce through TV success in Burn Notice and his new hit series Ash vs Evil Dead.

To enure that all customers meet Bruce – and have a groovy time – please note the following:

For each customer Bruce will sign any number of copies of Hail To The Chin: The Official UK & Ireland Tour Edition (available in store on the day) plus ONE other item of authorised merchandise.

There will be no opportunity for posed photos but have your phones and cameras ready – Forbidden Planet staff will be on hand to grab a picture of Bruce as he signs your book.