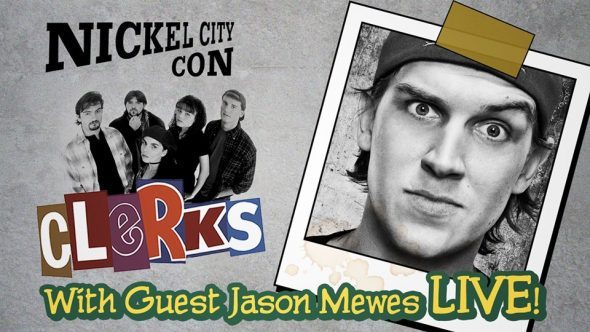 About CLERKS:
When Dante Hicks (Brian O’Halloran) is reluctantly put in charge of the Quick Stop market on his day off, he tries, though half-heartedly, to perform his minimum-wage duties as efficiently as possible. This gets tough amidst the on-going fight with his girlfriend, Veronica (Marilyn Ghigliotti), and his attempt to get back together with his ex-girlfriend, Caitlyn Bree (Lisa Spoonhauer).

Meanwhile, his friend and alter ego Randall (Jeff Anderson) is working behind the counter of the adjacent video store — at least when he feels like it. Randall’s unabashed disdain of his place of employment, a long with his self-admitted hatred towards its customers is a sharp contrast to Dante’s feeble attempts at the niceties of customer service. Much of the film consists of Randall and Dante’s criticism of their customers, their lives, and the world in general.

About Jason Mewes:
Jason Mewes is an American television and film actor, film producer and internet radio show host. Born and raised in Highlands, New Jersey, along with his best friend and future filmmaker Kevin Smith. He has played Jay, the vocal half of the duo Jay and Silent Bob (Kevin Smith), throughout the View Askewniverse films.