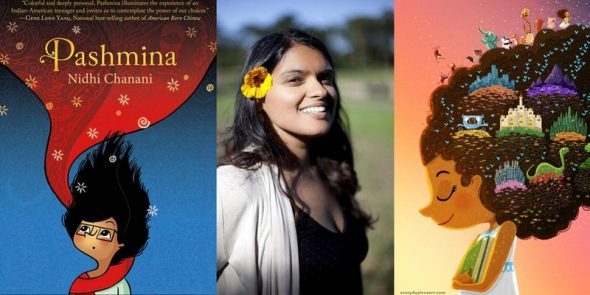 Nidhi Chanani appears at the Foster City Library on Saturday, February 17, 2018 at 2:00 PM for a presentation and signing of her debut graphic novel Pashmina.

About PASHMINA:
Priyanka Das has so many unanswered questions: Why did her mother abandon her home in India years ago? What was it like there? And most importantly, who is her father, and why did her mom leave him behind? But Pri’s mom avoids these questions–the topic of India is permanently closed.

For Pri, her mother’s homeland can only exist in her imagination. That is, until she find a mysterious pashmina tucked away in a forgotten suitcase. When she wraps herself in it, she is transported to a place more vivid and colorful than any guidebook or Bollywood film. But is this the real India? And what is that shadow lurking in the background? To learn the truth, Pri must travel farther than she’s ever dared and find the family she never knew.

In this heartwarming graphic novel debut, Nidhi Chanani weaves a tale about the hardship and self-discovery that is born from juggling two cultures and two worlds.

Nidhi Chanani was born in Kolkata, India, and raised in Southern California. She holds a degree in literature from the University of California, Santa Cruz. She creates illustrations that capture the love in everyday moments. In 2012 she was honored at the White House as a Champion of Change for her art. Her illustrations are sold in boutiques along the West Coast and she’s worked with companies like Disney and Hasbro. Nidhi lives in the San Francisco Bay area with her husband, daughter, and two cats. Pashmina is her first graphic novel.