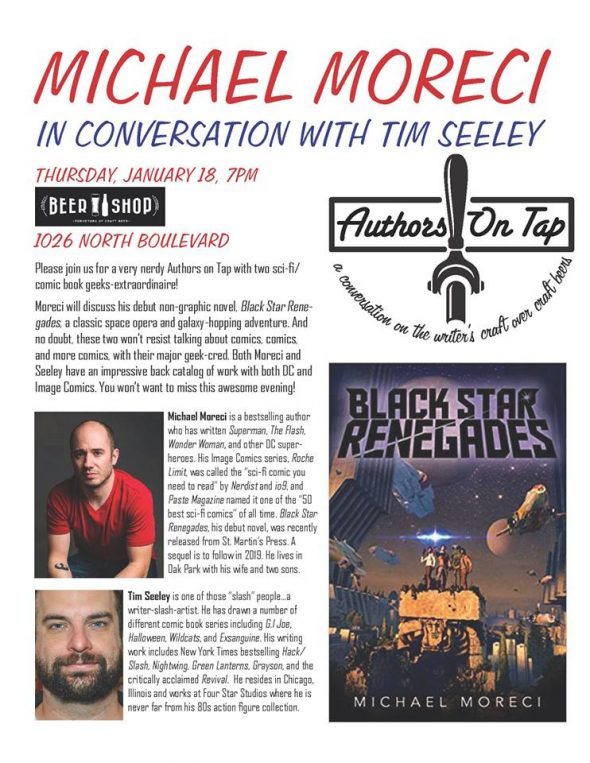 Michael Moreci appears in conversation with Tim Seeley at BeerShop on Thursday, January 18, 2018 at 7:00 PM.

Moreci will discuss his debut non-graphic novel, Black Star Renegades, a classic space opera and galaxy-hopping adventure. And no doubt, these two won’t resist talking about comics, comics, and more comics, with their major geek-cred. Both Moreci and Seeley have an impressive back catalog of work with both DC and Image Comics. You won’t want to miss this awesome evening!

Michael Moreci is a bestselling author who has written Superman, The Flash, Wonder Woman, and other DC super-heroes. His Image Comics series, Roche Limit, was called the “sci-fi comic you need to read” by Nerdist and io9, and Paste Magazine named it one of the “50 best sci-fi comics” of all time. Black Star Renegades, his debut novel, was recently released from St. Martin’s Press. A sequel is to follow in 2019. He lives in Oak Park with his wife and two sons.

Tim Seeley is one of those “slash” people…a writer-slash-artist. He has drawn a number of different comic book series including GI Joe, Halloween, Wildcats, and Exsanguine. His writing work includes New York Times bestselling Hack/Slash, Nightwing, Green Lanterns, Grayson, and the critically acclaimed Revival. He resides in Chicago, Illinois and works at Four Star Studios where he is never far from his 80s action figure collection.