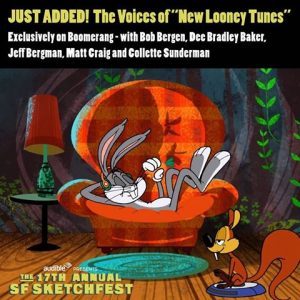 About New Looney Tunes:
The hilarious, heroic and mischievous Bugs Bunny you love is back! Follow Bugs as he stars in a new series consisting of slapstick comedic shorts that find the iconic, carrot-loving rabbit matching his wits against classic characters, such as Theodore “Tasmanian” Devil, Wile E. Coyote and Yosemite Sam. Along the way, Bugs will encounter brand-new foes but he’ll have some help from new friends like Bigfoot and Squeaks the Squirrel! Catch it on Boomerang, the streaming service with all the best cartoons, including all new exclusive versions of  Looney Tunes, Scooby Doo, Tom and Jerry, and more.