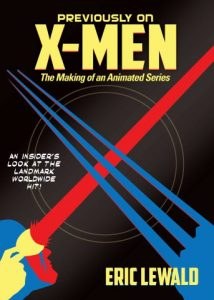 Eric & Julia Lewald will be signing their new book, Previously on X-Men: The Making of an Animated Series, at Legacy Comics & Cards on Wednesday, December 20th from 12:30 – 1:30 PM.

Eric Lewald is one of the premier writer/producers in youth-oriented and animated television, with over 500 produced credits. He has been showrunner on 13 series, including ExoSquad, RoboCop: Alpha Commando, Beetlejuice, Mummies Alive, Street Fighter: TAS, and Young Hercules, starring Oscar-nominee Ryan Gosling. Eric has been a studio executive and has been nominated for an Emmy Award. He considers X-Men: the Animated Series his favorite job ever!

Eric’s new book retells his personal, inside account of how the series got on the air, the many challenges that were overcome and how the show prevailed. The head writer interviewed 36 of the artists, writers, voice cast, and executives who helped make this game-changing series a worldwide success. This book is an authoritative look into the creation of the animated series that nobody expected to succeed. Lewald offers a unique behind-the-scenes look at the Saturday-morning cartoon series that changed Hollywood.