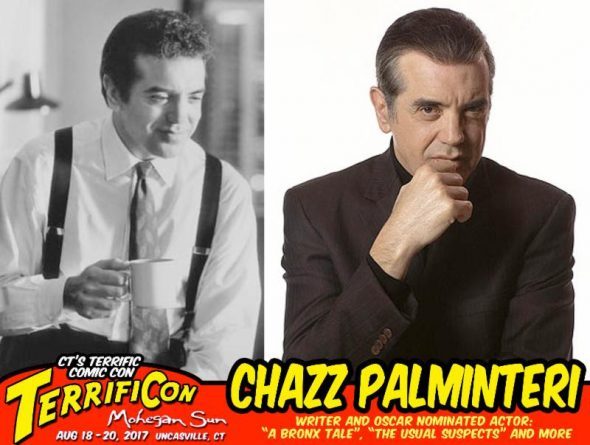 Chazz is an actor, screenwriter, and producer, best known for his Academy Award-nominated role for Best Supporting Actor in Bullets Over Broadway, the 1993 film A Bronx Tale, based on his play of the same name, Special Agent David “Dave” Kujan in The Usual Suspects, Primo Sidone in Analyze This and his recurring role as Shorty in Modern Family. Fans will recognize his voiceover work from Stuart Little, Hoodwinked!, Arthur and the Minimoys, and even Call of Duty: Black Ops II.

Chazz will be meeting his fans and be doing a special panel on Sunday afternoon about acting and writing for our attendees.

More than celebrities TERRIFICON is the home for fans of comic books as we bring you over 50 artists and writers from Marvel, DC Comics, Image Comics, IDW Comics, Dynamite Comics and more including Iron Fist and Defenders creator Roy Thomas!

Tickets are on sale NOW Mohegan Sun Box Office, Comic Book Shops in Connecticut like A Timeless Journey, Legends of Superheros, Sarge’s Comics and Games and Omni Comics and Cards CT. You can also order them any time at Ticketmaster! Kids 10 and under get in FREE and there is always plenty of FREE parking! Don’t miss all the exclusive and unique features of this year’s TERRIFICON – three full days of fun for the whole family featuring more than 60 artists and 300 dealers of comic books, costume contests, cosplay, artwork and collectibles, video games, interactive workshops, after parties and so much more. See more information on our website www.terrificon.com

NYC – Standing Up Falling Down Q&A