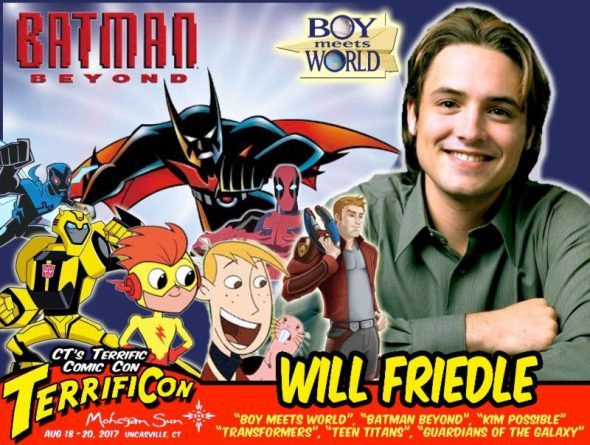 Terrificon welcomes actor and voice over talent (plus a fellow Connecticut native)
Will Friedle from Batman Beyond and Boy Meets World to Mohegan Sun on August 18-20, 2017!

Will Friedle is an actor best known for his comedic roles, most notably as underachieving elder brother Eric Matthews on the long-running TV sitcom Boy Meets World from 1993 to 2000. As the show was drawing to a close Will segued into voice acting, which has given him an opportunity to slip in and out of numerous superhero roles, including the now iconic role of Terry McGinnis/Batman in Batman Beyond.

Will can also be heard as Blue Beetle (Jaime Reyes) in Batman: The Brave and the Bold, Nightwing in Justice League Unlimited: Animal Instincts and Batman Unlimited: Monster Mayhem; and Deadpool in Ultimate Spider-Man. To a generation of Disney fans, however, he’ll always be the beloved Ron Stoppable, sidekick to the brave Kim Possible. Will was also Lion-O in the rebooted ThunderCats animated series, Doyle in The Secret Saturdays; and Bumblebee in Transformers: Prime, Transformers Prime Beast Hunters: Predacons Rising and Transformers: Robots in Disguise.

In 2015, Will made a triumphant return to the role of (now Senator) Eric Matthews in the Disney Channel series Girl Meets World. He is also Star-Lord in Marvel’s Guardians of the Galaxy animated series.

More than celebrities TERRIFICON is the home for fans of comic books as we bring you over 50 artists and writers from Marvel, DC Comics, Image Comics, IDW Comics, Dynamite Comics and more including Iron Fist and Defenders creator Roy Thomas!

Tickets are on sale NOW Mohegan Sun Box Office, Comic Book Shops in Connecticut like A Timeless Journey, Legends of Superheros, Sarge’s Comics and Games and Omni Comics and Cards CT. You can also order them any time at Ticketmaster! Kids 10 and under get in FREE and there is always plenty of FREE parking! Don’t miss all the exclusive and unique features of this year’s TERRIFICON – three full days of fun for the whole family featuring more than 60 artists and 300 dealers of comic books, costume contests, cosplay, artwork and collectibles, video games, interactive workshops, after parties and so much more. See more information on our website www.terrificon.com