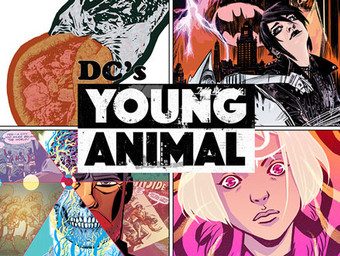 Gerard Way is the Eisner Award-winning writer of The Umbrella Academy and the comics miniseries The True Lives of the Fabulous Killjoys. He is the creative mind behind the new grassroots imprint, DC’s Young Animal, whose retro-inspired lineup bridges the gap between the DC Universe and Vertigo. Way is also widely known for his former role as the lead vocalist and co-founder of the alternative rock band My Chemical Romance.

Jon Rivera is a writer of comic books and graphic novels, best known for his work on DC’s Young Animal. CAVE CARSON HAS A CYBERNETIC EYE, co-written by imprint founder Gerard Way, is one of the line’s inaugural titles.

Jody Houser is the creator behind the webcomic Cupcake POW! Houser has written Faith for Valiant Comics, Max Ride: Ultimate Flight and Agent May for Marvel, and Orphan Black for IDW. She has been a contributing writer to numerous comics anthologies, including Avengers: No More Bullying, Vertigo CMYK: Magenta, and both Womanthology series. Houser contributed to Justice League of America: Road to Rebirth and is currently writing Mother Panic for DC.