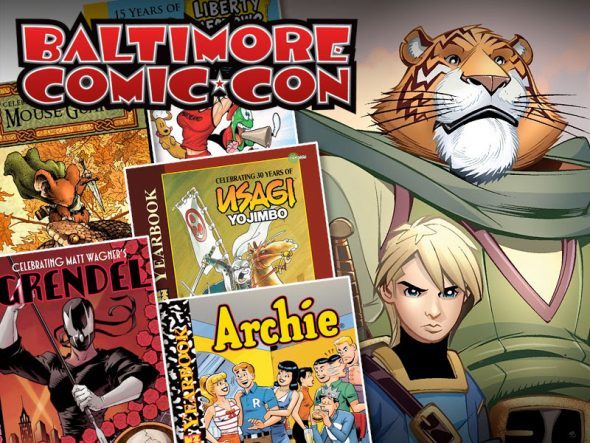 Continuing our tradition, the Baltimore Comic-Con Yearbook returns in 2017 for the sixth year, celebrating creators appearing at this year’s show. This year’s book of art features interpretations of characters from Tellos, sometimes in conjunction with the contributing guest’s own creations, in a celebration of creator-owned properties.

Beautifully designed by returning guest and Love and Capes creator Thom Zahler, the book comes in a standard and, for VIP ticket holders, a limited VIP cover edition.

Tellos is a high-adventure comic book series that, over the course of its 10 issue run, transports you to magikal lands from the farthest reaches of your imagination and introduces you to a cast of colorful characters you won’t soon forget. Created in 1999 by writer Todd Dezago and artist Mike Wieringo, Tellos unspools the tale of a young boy, Jarek, who, along with his sword-wielding Tiger-companion, Koj, find themselves thrust into the roles of reluctant heroes. Soon teamed with a young pirate captain named Serra, the three embark on a fantastic and mysterious mission to discover where Jarek’s strange new magikal abilities have come from. Oh, and part of that mystery…? Who is the dark and malevolent figure trying desperately to hunt them down and have those powers for his own.

Tellos is a magikal patchwork world made up of a myriad of different realms, populated by creatures of myth and legend. A fantastic land filled with adventure around every corner…and danger at every turn.

Once again, our popular scavenger hunt returns in 2017! When you buy the book, you’ll get a list of Yearbook contributors and their table numbers. If you succeed in your hunt, you can get your choice of bonus prints!

“I have been more than honored to be a guest at the Baltimore Comic Con since meeting the show’s illustrious and gregarious organizer, Marc Nathan, some… fifteen years ago,” quipped Tellos writer Todd Dezago. “One of my favorite people, one of my favorite conventions. So, here’s a cool idea. About six years ago, Marc and his first lieutenant, Brad Tree, create the Baltimore Comic-Con Yearbook, an annual treat that is both a showcase of comicdom’s top talents as well as an instant collector’s item. ‘Yo, Todd–what’s that all about?’, you say? Well, I’m glad you asked. Each year, the Yearbook spotlights a classic or independent comic book series and encourages some of the industry’s top artists to create for us their vision and version of these familiar characters; The Archies Gang, the colorful cast from Frank Cho’s Liberty Meadows, Stan Sakai’s wonderful Usagi Yojimbo, David Peterson’s fantastic Mouse Guard, and Matt Wagner’s Grendel. The book then becomes a map of the show as well, as convention-goers are then directed around the convention hall floor to meet and collect the autographs of the various artists. A fun time is had by all!”

“Tellos is such a unique property,” said Marc Nathan, promoter of the Baltimore Comic-Con. “It’s a fascinating story with gorgeous, unique, striking characters, and it was created by great friends of the show. I’m really excited to see what our guests will do with the Tellos characters, or how they’ll draw them to interact with characters of their own. This should be another fantastic-looking Yearbook that our attendees will love.”

The book will be sold, and the art auction will be held at 5pm on Saturday, September 23rd in our Main hall, in the Exclusives Booth in the lobby. The book will be available at the Baltimore Comic-Con for $29.99.

In the coming weeks, look for more announcements from the Baltimore Comic-Con. We are looking forward to highlighting our guests, industry exclusives, and programming. The latest developments can always be found on our website, Twitter, Instagram, and Facebook pages.