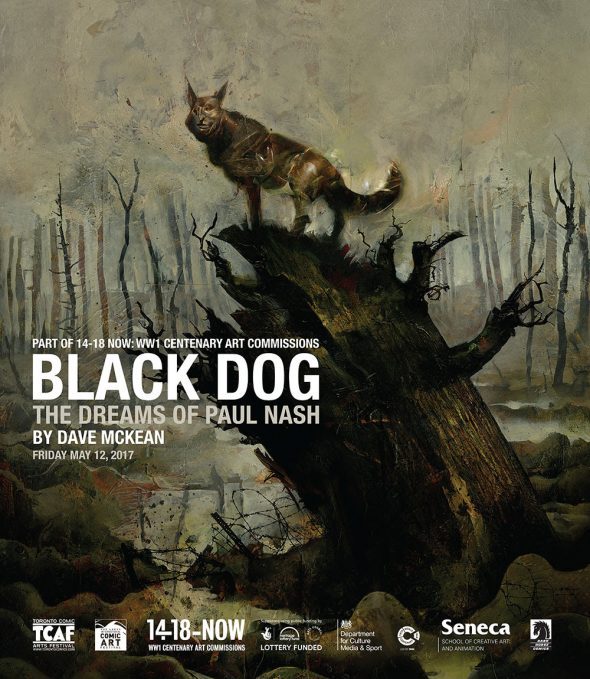 The Toronto Comic Arts Festival (TCAF) and Seneca College are proud to present the incredible live performance of BLACK DOG: The Dreams of Paul Nash, by Dave McKean, as part of TCAF 2017. This special multimedia presentation will be performed by McKean, alongside Cellist and Baritone Matthew Sharp and Violinist Clare Haythornthwaite. Get tickets here…

Traveling to Canada after its performances in England after being commissioned by the Lakes International Comic Art Festival, Black Dog – The Dreams of Paul Nash is a multimedia performance and new graphic novel by illustrator, comic artist, filmmaker and musician Dave McKean. Part of 14-18 NOW, the UK’s arts programme for the First World War centenary, McKean explores the work of Paul Nash, one of the most important British artists of the twentieth century, whose First World War experiences inspired him to create paintings of disturbing, lasting power.

Doors will open at 8:30pm, with the performance scheduled to begin at 9:00pm. A short Q&A will follow, but there will be no signing at this event. Autograph opportunities will take place at the main Festival on Saturday May 13 and Sunday May 14, see TorontoComics.com for details.

‘I’d like to explore Paul Nash’s role in the birth of modernism and surrealism, and how those movements were actually witnessed by Nash in the dream-/nightmare-like battlefields of the war. He used the landscape that he loved to try to deal with what he’d been through, and to try and find calm and solace beyond.’ Dave McKean

This performance is presented by Seneca College, and by LICAF: The Lakes International Comic Art Festival, with special thanks to Dark Horse Comics.