Programming Highlights Include, The Psychology of Batman, John Carpenter’s The Thing 35th Anniversary Art Book, How To Create Characters and Write Super Stories, LARP 101: Surviving the Zombie Apocalypse and so much more! 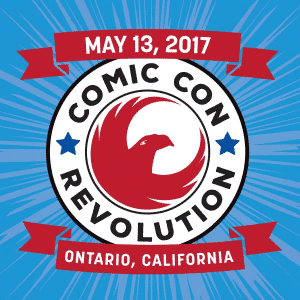 New York, NY April 26, 2017 – Comic Con Revolution (CCR) The Inland Empire’s first full scale Comic Con will be held on Saturday, May 13, 2017 at the Ontario Convention Center in Ontario California. With CCR only a few weeks away, Atomic Crush Events is proud to announce the show’s full programming slate is on ComicConRevolution.com for attendees to view.

#GenerationRevolution: Animators Day Off – What do artists and writers do when they aren’t working on your favorite animated projects from film, TV, and video games? From comic books, children’s books, even novels; what creative people do as a side job and for fun will amaze you. Join Mike Morris (Ducktales 2017), Mike Collins (Mr. Peabody and Sherman), Steven E Gordon (X-Men Evolution), Aaron Long (Bojack Horseman), Rachel Reed (Rockstar Games) and Anne Walker Farrell (Bojack Horseman).

The Psychology of Batman – Join Dr. Andrea Letamendi and Brian Ward, as they bring their hit podcast, The Arkham Sessions, to Comic Con Revolution! Using episodes of the iconic ’90s cartoon Batman: The Animated Series, The Arkham Sessions dishes out real knowledge about mental health and mental illness, as they analyze Batman and his infamous Rogues Gallery. Alongside special guest Livio Ramondelli (IDW’s Transformers), this very special panel will take a look at the fan favorite episode “”Over the Edge.””

John Carpenter’s “The Thing” 35th Anniversary Art Book – Filled with art inspired by the film. Join special guests Tim Bradstreet, Cat Staggs, and Stormking Productions’ Sandy King Carpenter as they take a look at some of the art being seen for the first time ever, and talk about their memories of watching John Carpenter’s The Thing. Oh, and did we mention The Death of Superman Lives: What Happened? Filmmaker and Slayer: Repentless comic book writer Jon Schnepp is hosting?

How To Create Characters and Write Super Stories Do you want to create your own characters and write and draw their amazing adventures? Come join Super Siblings and Pandamonium cartoonist Patrick Scullin as he teaches how to make original picture books. Bring your imagination and some drawing supplies and Patrick will guide you through the steps of creating a story and putting it to paper. No drawing experience is required for this family friendly session.

LARP 101: Surviving the Zombie Apocalypse” This panel is for anyone interested in what LARP (Live Action Role Playing) is and how it is played/how to get into LARPing.

“The support we have received from not only the comic community but from the Inland Empire itself has been overwhelming,” said Atomic Crush Events co-founder Drew Seldin.  “Putting together an event you can be proud of takes hard work but it also requires that those around you believe in what you are doing as much as you do.”

Information about Comic Con Revolution is available at www.comicconrevolution.com

Comic Con Revolution was founded on very simple principles.  We are excited to celebrate comics and the creative arts.  At the absolute core of what we do are the creators themselves.  The people who create the comics, games, toys, film, movies and more that we all love.  Without their tireless dedication to creating the fantastic worlds we all get lost in, events like Comic Con Revolution would not be possible.  We strive to create the best possible experience for attendees, exhibitors and guests alike.  Our team of event industry veterans are dedicated to working hard to create that experience for each of you.

Atomic Crush Events is an event consultation and management company that was founded on experience and innovation.  Bringing together expertise in event management, marketing, sales and business development to create a unique team that can analyze and identify the best course of action when developing a live event.  Our philosophy is simple – create the best experience possible for attendees, exhibitors and guests alike.

More information is available at www.atomiccrushevents.com