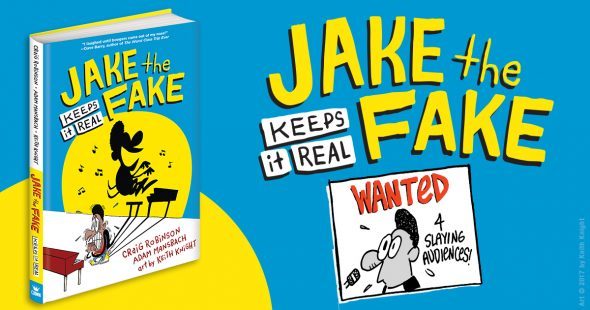 Craig Robinson and Adam Mansbach appear at the Grove’s Barnes & Noble on Wednesday, April 26th at 7:00 PM to discuss and sign their wildly entertaining new book, JAKE THE FAKE KEEPS IT REAL.

Jake can barely play an instrument, not even a kazoo. And his art? It’s better suited for Pictionary than Picasso. Which is a real problem because Jake just faked his way into the Music and Art Academy for the gifted and talented (and Jake is pretty sure he is neither). More jokester than composer, Jake will have to think of something quick before the last laugh is on him.

This is a wristbanded event.
A wristband will be issued on a first come, first serve basis to customers who purchase Jake the Fake from Barnes & Noble at The Grove beginning April 26th at 9am
• Limit 1 wristband per book
• No memorabilia please
• Check Back for more Details as they Become Available