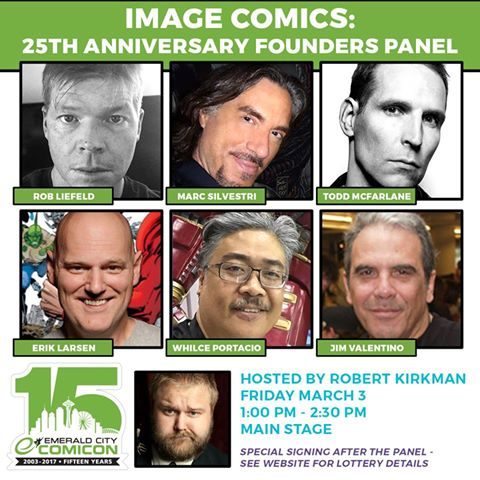 Emerald City Comicon hosts a reunion of the Image Comics founders for their 25th anniversary on FRIDAY MARCH 3rd at 1:00 PM with an exclusive signing to follow (details at the link)!

Twenty-five years ago, a group of comics artists looked at the difference between what they were capable of and what they were being given, and left the promise of steady work for new pastures. The result was Image Comics, which has grown from an upstart group to a comics publisher that has changed the course of the industry. Image’s 25th anniversary year begins with this special event, a very rare gathering of original founders Todd McFarlane, Rob Liefeld, Erik Larsen, Jim Valentino, Marc Silvestri, and Whilce Portacio, moderated by Robert Kirkman.

Emerald City Comicon (ECCC) is the premier comic book & pop culture convention in the Pacific Northwest. Join us March 2-5, 2017. For tickets and more information please go to the website: www.emeraldcitycomicon.com