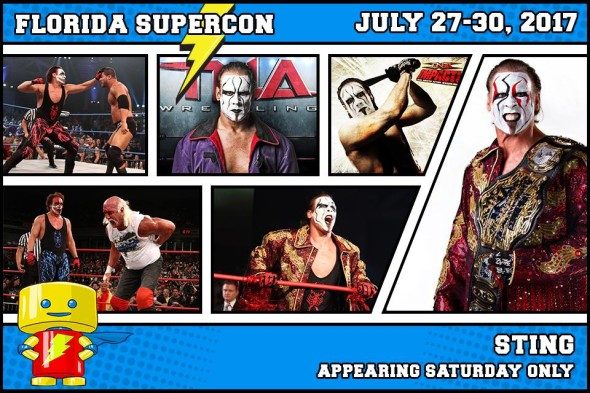 Sting has just been announced as a special guest for FLORIDA SUPERCON July 27-30, 2017 at The Greater Fort Lauderdale Convention Center

Sting is a wrestling legend, best known for his career with World Championship Wrestling (WCW), Total Nonstop Action Wrestling (TNA), and most recently with World Wrestling Entertainment (WWE). Sting is regarded as one of the greatest professional wrestlers of all time, having held a total of 25 total championships throughout his career, including 21 between WCW and TNA, which includes 14 major world championship reigns, in a three decade career. Sting was inducted into the TNA Hall of Fame in 2012 and WWE Hall of Fame in 2016.

Over 150 guests will be announced in the weeks and months leading up to the show! Some of the guests already confirmed include:

Plus dozens of Cosplay Guests, Entertainment Guests, and Fan Groups!