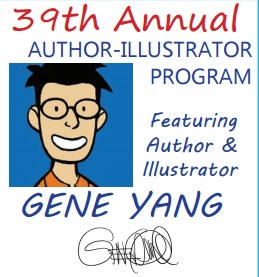 The East Baton Rouge Parish Library is proud to present author Gene Luen Yang as the featured speaker for the 39th Annual Author-Illustrator Program. As a very highly anticipated fall event, this year the Program is scheduled to be held Thursday and Friday, October 13 and 14, at the new Main Library at Goodwood, 7711 Goodwood Blvd.

Adults, teens and children are invited to meet Yang at the FREE Thursday evening program on October 13th.

Then on Friday, October 14, Yang will present a workshop for comic book and anime fans, teachers, librarians, writers and parents. The registration fee for this event is $25 for adults and $10 for students, details at the link. BOTH OF THESE EVENTS will include a book sale / autograph session.

This informative Author-Illustrator Program allows teachers, librarians, parents and others a unique opportunity to hear “the story behind the story”directly from writers and illustrators of literature for children and young adults. It is a fascinating look at how an idea becomes a book.

Some notable names in the field of literature who have been featured during these annual programs have included: Katherine Paterson, Linda Sue Park, Avi, E.L. Konigsburg, Stephen Kellogg, Lois Lowry, Paula Danziger, Richard Peck and Patricia and Fred McKissack.

A selection of Gene Yang’s books will be available for purchase during the program. Mr. Yang has agreed to sign these books. We regret books from libraries or personal collections cannot be autographed.

Gene Luen Yang is this year’s current National Ambassador for Young People’s Literature. He began drawing comic books in the fifth grade, and in 1997 he received a Xeric Grant for his first comic, Gordon Yamamoto and the King of the Geeks. He has since written and drawn a number of titles, including Duncan’s Kingdom, The Rosary Comic Book, Prime Baby and Animal Crackers. Yang’s first graphic novel from First Second, American Born Chinese, was a National Book Award finalist, as well as the winner of the Printz Award and an Eisner Award. Yang also won an Eisner for The Eternal Smile, a collaboration with Derek Kirk Kim. He is the author of the Secret Coders series (with artist Mike Holmes) and has written for the hit comics Avatar: The Last Airbender and also Superman. Yang lives in the San Francisco Bay Area. 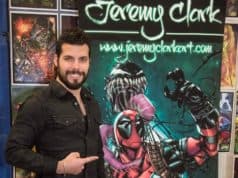 WA – My So-Called Superpowers: All the Feels Signing 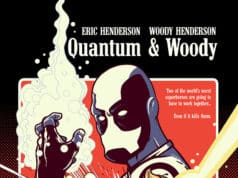 Colin Solan - January 19, 2020
0
Press Release: Happy New Year TERRIFICON Fans! We know you love COMICS! So we are starting the year off with some cool guest announcements as we...