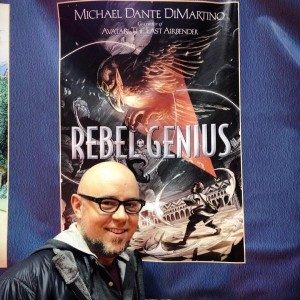 If you are a fan of the award-winning animated Nickelodeon shows Avatar: The Last Airbender and The Legend of Korra, you need to come hear co-creator Michael DiMartino talk about his new adventure series, Rebel Genius, which Soman Chainani, author of The School for Good and Evil trilogy calls “a mind-blowing new series, a passionate blend of adventure, mystery, and puzzle-solving that has no end to its imagination.”

In twelve-year-old Giacomo’s Renaissance-inspired world, art is powerful, dangerous, and outlawed. A few artists possess Geniuses, birdlike creatures that are the living embodiment of an artist’s creative spirit. Those caught with one face a punishment akin to death, so when Giacomo discovers he has a Genius, he knows he’s in serious trouble. Luckily, he finds safety in a secret studio where young artists and their Geniuses train in sacred geometry to channel their creative energies as weapons. But when a murderous artist goes after the three Sacred Tools–objects that would allow him to destroy the world and everyone in his path―Giacomo and his friends must risk their lives to stop him.

Michael will be in conversation with Gene Luen Yang, National Ambassador for Young People’s Literature, author of American Born Chinese, Boxers and Saints, and Secret Coders and writer of the Avatar: The Last Airbender graphic novels. This is a conversation not to be missed!