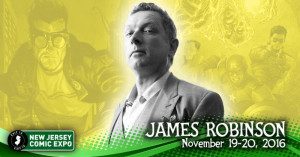 Press Release:
Fan favorite writer James Robinson will be making the trip to join the awesome list of comic creators coming to the 2nd year of the New Jersey Comic Expo – November 19 & 20 at the New Jersey Convention & Expo Center in Edison, NJ!

James Robinson was born in Great Britain, but has lived in the U.S. since 1989 where he began working in comics initially for DC and Dark Horse Comics. Among his more known and regarded works are Grendel Tales: Four Devils, One Hell, sundry Legends of the Dark Knight arcs, Superman, Justice League of America and Earth-2. He is perhaps most well known for his award winning runs on both Starman and Leave It To Chance.

After a long working relationship with DC Comics, James made the switch to Marvel Comics where he wrote All-New Invaders and concluded the Fantastic Four for the foreseeable future, with a lengthy run on the book. Currently he is scripting Squadron Supreme and the Scarlet Witch. He also wrote Airboy for Image Comics and has other creator-owned series forthcoming including Heaven for Image Comics and Grand Passion at Dynamite Entertainment.
This year we are offering a low introductory price on tickets if you buy early! A weekend ticket is JUST $45, Saturday is $30 and Sunday is $25, so get your tickets now before prices go up!

Tickets for the 2016 New Jersey Comic Expo are NOW ON SALE! Take advantage of a low introductory price on tickets if you buy early this year! A weekend ticket is JUST $45, Saturday is $30 and Sunday is $25, so get your tickets now before prices go up! Remember! Kids 10 & under are FREE! (Limit 2 kids per paid adult). The convention will take place on November 19-20, 2016. Connect with social media – Facebook, Twitter & Instagram for the most up to the minute guest and event updates!