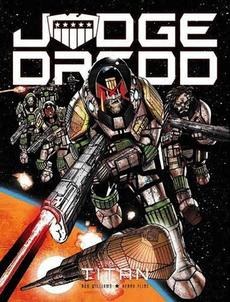 ROB WILLIAMS will be signing JUDGE DREDD: TITAN at the Forbidden Planet Bristol Megastore on Saturday 18th June from 1:00 – 2:00 PM.

Now the Justice Department of Mega-City One has lost contact with the Titan penal colony – a big problem considering that it houses over one thousand law-breaking ex-judges, many of which have a grudge with their old colleagues.

Dredd must team up with SJS Judge Gerhart – a man who holds him responsible for ‘Chaos Day’, and battle a formidable army led by one of the most dangerous ex-undercover Judge’s ever…

Rob Williams has a host of comics titles to his name, including titles for Marvel, DC, Dark Horse, Dynamite, IDW and Com.X. He is also the writer of The Royals, Master of War for Vertigo, Judge Dredd for 2000AD, and recently was one of the writers on the ‘Into The Light’ official tie-in comic for Namco Bandai’s DARK SOULS II computer game.