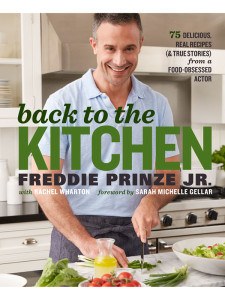 Most people know Freddie Prinze, Jr. from movies (She’s All That, Scooby-Doo, Star Wars Rebels) and as one half of beloved Hollywood power couple with Sarah Michelle Gellar. But to family, friends, and co-stars he’s always been a terrific father and skilled home cook who prepares delicious meals for his family every night

With personal family photos from Freddie and Sarah’s beautiful LA home and Freddie’s hilarious stories about the life of an actor, husband, and father in Hollywood, Back to the Kitchen shares more than just recipes. It’s an inside look at a beloved movie and TV personality who has acted, cooked, and eaten his way around the world. Join Freddie Prinze, Jr. for this Special Event and book signing.

This is a wristbanded event.