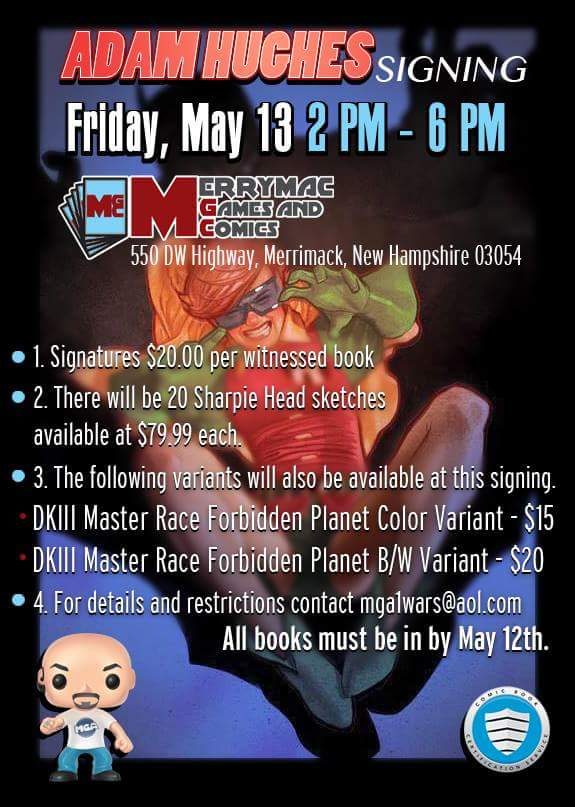 Comic creators Adam Hughes and Allison Sohn make a rare New England appearance at Merrymac Games and Comics on Friday, May 13, 2016 from 2:00 PM till 6:00 PM!

Best known as a cover artist with long runs on titles including Wonder Woman, Catwoman, Batgirl, Tomb Raider, Star Wars Legacy, and many more, Adam Hughes is a thirty year veteran of the comic book industry and widely regarded for his stylized renderings of women; super heroines, damsels in distress, figures in fantasy. Just recently Archie Comics announced Hughes will be the writer and artist of the re-launched Betty & Veronica ongoing series!

Sketch card artist Allison Sohn’s work has been showcased in several trading card sets, including: Star Wars Galaxy Series 4 and 5 and the Star Wars 30th Anniversary Collection; Women of Marvel; Indiana Jones Heritage; Lord of the Rings Masterpieces, Series 1 and 2; and the Red Sonja 35th Anniversary. In addition, she provided exclusive artwork for both Star Wars Celebration IV and V.

Here are the details of the signing event with Adam Hughes/Allison Sohn on May 13, 2016:

Mr. Hughes will be doing pre-ordered sketch covers. There will be 20 spots and they will be Sharpie head sketches. These will be $79.99 each if you supply your own cover. If you choose one of the covers we have in stock, it will be plus the cover price of the comic. These items will be available for CBCS grading for an additional $10 NOT including the grading from CBCS.

CBCS Signing period. ALL books will be going through one representative by request of Mr. Hughes. Mr Hughes will be charging $10 per signature for a maximum of 10 books presented at one time. You are welcome to go to the back of the line to obtain more signatures.
**CBCS witnesses, please note, you MUST go through our representative on site. There is only one witness authorized for this event by request of Mr. Hughes.

Mr. Hughes will be doing sketch covers for the entire hour. These books will NOT be available for CBCS witnessing. CBCS witnesses that attempt to go around the systems set in place will be reported to CBCS.

Mr. Hughes will be signing comics during this time. There is a maximum of 5 free signatures per person. Each additional book will be $10 per signature. These books will NOT be available for CBCS witnessing. CBCS witnesses that attempt to go around the systems set in place will be reported to CBCS.

CBCS witnessing provided by Michael Alexandropoulos of www.moregreatart.com. If you are interested in having your books signed and submitted for grading at the event, please contact him at mga1wars@aol.com.

***please note, schedule is subject to change to accommodate breaks for Mr. Hughes and Ms. Sohn.