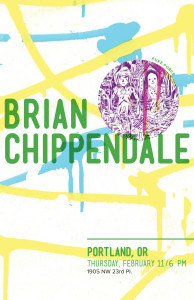 Brian Chippendale presents an exciting new exhibition at Place Gallery in Portland, Oregon. “Flat Earths” offers new work by Brian Chippendale created as the resident artist at Kahnaway in early 2016, and consists of a series of collages on wood using painting, drawing, and found imagery. See above for a preview of some of Brian’s awesome work, or stay up to date on it by following Brian on instagram: @chimpendale.

That’s not all: the night the exhibit opens, the good folks at Floating World Comics will be selling copies of Brian Chippendale’s much anticipated D+Q book Puke Force at the event, a few days before it hits stores!

Colin Solan - August 12, 2020 0
Mainframe Comic Con kicks off one night early with a special Preview Night featuring some of the top names in the industry!!! Preview Night starts...