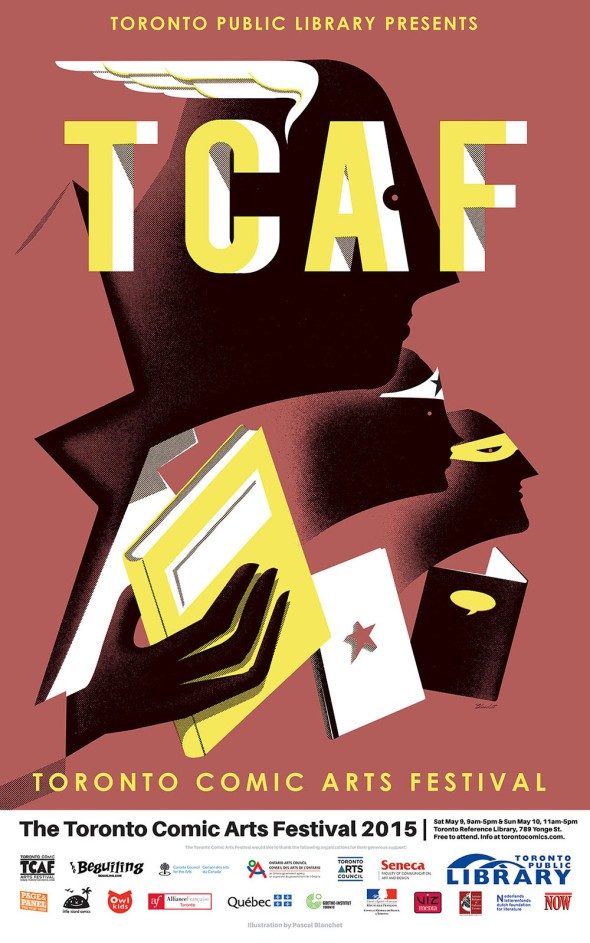 The Toronto Comic Arts Festival (TCAF) is thrilled to announce our initial Featured Guests and Events for TCAF 2016, taking place May 14th and 15th in Toronto, Canada! With over 400 cartoonists scheduled to attend from more than a dozen countries on their way to Toronto this May, we’re getting ready celebrate the very best in comics, graphic novels, bandes dessinées, and manga! Prepare yourself for a week of readings, launches, and art events culminating in a massive, FREE two-day exhibition at Toronto Reference Library, May 14 and 15, 2016!

Every year the Toronto Comic Arts Festival showcases Canada’s incredible comics talent on a world stage by promoting some of our best and brightest creators and publishers, and inviting the attention of the global cartooning community. The 2016 programme builds on our previous successes, with a continued commitment to offer more engaging programming, in multiple formats, focusing on compelling and challenging work being made across the world. Art sales and exhibition, increased programming, and gallery shows are at the core of the 2016 programme, as highlighted by these talented Featured Guests:

And these are just the first eight featured guests among the more than 400 Canadian and International cartoonists participating in the 2016 Festival.

Featured guests will continue to be announced through January, February, and March, with special guests from Germany, Italy, USA, France, Japan, and Canada still to be revealed!

In addition to the programmes mentioned above, TCAF 2016 will also feature several programming spotlights including a special tribute to the wonderful and hardworking Canadian publisher Conundrum Press, on the occasion of their 20th Anniversary, and First Second Books on their 10th Anniversary.

The Toronto Comic Arts Festival 2016, Saturday May 14, 9am-5pm, and Sunday May 15, 10am-5pm, @ Toronto Reference Library, 789 Yonge Street. Attendance is FREE to the public. Full details on the TCAF website: www.torontocomics.com