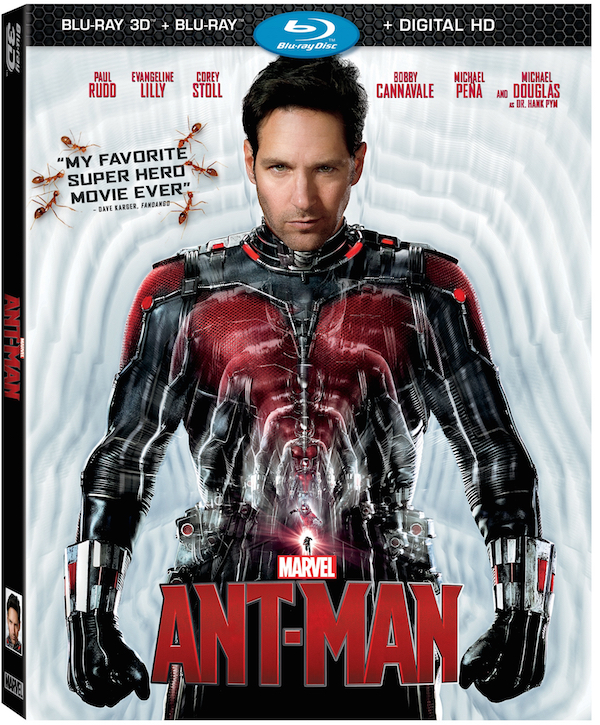 Marvel really produced a winner with Ant-Man with great characters and great visuals. I enjoyed it a great deal. I was expecting more of a comedic caper movie, but it surprised me with how serious and dramatic it was at times.

Paul Rudd stars as the Scott Lang version of the character. After pulling off a Robin Hood-style heist and ending up in prison, he’s trying to put his life back together and stay connected with his daughter. I’ve always liked Paul Rudd as an actor, and I think he does a great job in this.

I wasn’t very enthusiastic about the decision to make Hank Pym (Michael Douglas) an older character, but I can see how it really works in this movie. The heart of this film involves two fathers and two daughters. Lang is trying to be the hero his daughter deserves while Hank is trying to reconnect with his daughter Hope (Evangeline Lilly). It all has a great deal of emotional resonance. It also manages to address the age-old comic book conundrum as to why some inventors in the Marvel Universe don’t make their technological creations more readily available.

The first half of the movie might seem to drag a bit as Scott goes through quite a lot of preparation and training, but the movie really picks up when Scott and crew go into action for the task for which Hank recruited him. The end sequence manages to bring all the supporting characters together in a cool way. Along the way we also get a fun fight with a guest-starring member of the Avengers (which, of course, builds up to Ant-Man’s inclusion in the upcoming Captain America: Civil War)!

Although this was a troubled production with original director Edgar Wright dropping out while the movie was in pre-production, Marvel really pulled it together and made it one of their best films. Since Marvel has been very genre-oriented of late and this movie was described as a heist movie, I’m really curious to see where they go with the already announced sequel Ant-Man and the Wasp. At any rate, we are sure to see more of Evangeline Lilly which is never a bad thing in my book.

Minor Caution for Parents: This movie does have some blatant profanity in it (as did Guardians of the Galaxy). As the parent of young kids myself, I really wish Marvel wouldn’t go this route and would instead keep it family-friendly.

SYNOPSIS:   The next evolution of the Marvel Cinematic Universe introduces the newest member of the Avengers: Marvel’s Ant-Man. Armed with the amazing ability to shrink in scale but increase in strength, master thief Scott Lang joins forces with his new mentor Dr. Hank Pym to protect the secret behind his spectacular Ant-Man suit from ruthless villains! With humanity’s fate in the balance, Pym and Lang must plan and pull off a daring heist against insurmountable odds. Filled with humor, awesome special effects and exclusive bonus features, this action-packed adventure takes you to new levels of pulse-pounding excitement!

Set your watch and count down the action in this fast-paced behind-the-scenes look at how to pull off a heist movie, including Scott Lang’s hilarious heist “family,” Ant-Man’s costume, plus amazing stunts and effects.

Shrink down to size in this fascinating look at creating the world from Ant-Man’s perspective, from macro photography through the subatomic.

A hard-hitting collection of content, including a glimpse at the future of Pym Technologies with Darren Cross, anchor Christine Everhart’s interview with soon-to-be-released prisoner Scott Lang on his notorious VistaCorp heist, and more.

Disney Movies Anywhere (DMA) is an engaging and family-friendly cloud-based digital movie service that makes it simple to buy your favorite Disney, Pixar, Marvel and Star Wars movies once and watch them anywhere.  With DMA you can explore Disney’s library of over 450 eligible digital movies, discover hours of new and exclusive short-form content, and watch your digital movies from the comfort of the living room or across multiple mobile devices.  Using the free DMA apps and website, you can connect your DMA account with participating providers including iTunes, Amazon Video, VUDU, Microsoft Movies and TV and Google Play and unlock access your eligible movie collections across platforms and devices –  iPhone, iPad, iPod Touch, Apple TV/Airplay, Amazon’s Fire tablets, Fire TV and Fire TV Stick, Microsoft Movies and TV service on Windows and Microsoft Xbox devices, Android mobile and tablet devices and Android TV, Chromecast and the Roku® platform.  In addition, you can redeem Digital Copy codes found in Disney, Pixar and Marvel Blu-rays and DVDs, as well as earn Disney Movie Rewards points with every digital purchase.

Marvel Entertainment, LLC, a wholly-owned subsidiary of The Walt Disney Company, is one of the world’s most prominent character-based entertainment companies, built on a proven library of more than 8,000 characters featured in a variety of media over seventy-five years.  Marvel utilizes its character franchises in entertainment, licensing and publishing.  For more information visit marvel.com.  © 2015 MARVEL